In music
Music
Music is an art form whose medium is sound and silence. Its common elements are pitch , rhythm , dynamics, and the sonic qualities of timbre and texture...
, the subdominant is the technical name for the fourth tonal degree
Degree (music)
In music theory, a scale degree or scale step is the name of a particular note of a scale in relation to the tonic...
of the diatonic scale
Diatonic scale
In music theory, a diatonic scale is a seven note, octave-repeating musical scale comprising five whole steps and two half steps for each octave, in which the two half steps are separated from each other by either two or three whole steps...
. It is so called because it is the same distance "below" the tonic
Tonic (music)
In music, the tonic is the first scale degree of the diatonic scale and the tonal center or final resolution tone. The triad formed on the tonic note, the tonic chord, is thus the most significant chord...
as the dominant
Dominant (music)
In music, the dominant is the fifth scale degree of the diatonic scale, called "dominant" because it is next in importance to the tonic,and a dominant chord is any chord built upon that pitch, using the notes of the same diatonic scale...
is above the tonic - in other words, the tonic is the dominant of the subdominant. It is also the note immediately "below" the dominant. In the C major scale
Major scale
In music theory, the major scale or Ionian scale is one of the diatonic scales. It is made up of seven distinct notes, plus an eighth which duplicates the first an octave higher. In solfege these notes correspond to the syllables "Do, Re, Mi, Fa, Sol, La, Ti/Si, ", the "Do" in the parenthesis at...
(white keys on a piano, starting on C), the subdominant is the note F; and the subdominant chord
Chord (music)
A chord in music is any harmonic set of two–three or more notes that is heard as if sounding simultaneously. These need not actually be played together: arpeggios and broken chords may for many practical and theoretical purposes be understood as chords...
uses the notes F, A, and C. In music theory
Music theory
Music theory is the study of how music works. It examines the language and notation of music. It seeks to identify patterns and structures in composers' techniques across or within genres, styles, or historical periods...
, the subdominant chord is symbolized by the Roman numeral IV if it is within the major mode (because it is a major triad
Triad (music)
In music and music theory, a triad is a three-note chord that can be stacked in thirds. Its members, when actually stacked in thirds, from lowest pitched tone to highest, are called:* the Root...
, for example F-A-C in C major) or iv if it is within the minor mode (because it is a minor triad, for example F-A-C in C minor).
Because ii6, ii, and neapolitan sixth chords contain the fourth scale degree in the bass, they are also considered subdominant harmonies because they substitute for the same harmonic purpose as chords built on the fourth scale degree.

A cadential subdominant chord followed by a tonic chord (the chord of the key of the piece) produces the so-called "plagal" (or "Amen") cadence
Cadence (music)
In Western musical theory, a cadence is, "a melodic or harmonic configuration that creates a sense of repose or resolution [finality or pause]." A harmonic cadence is a progression of two chords that concludes a phrase, section, or piece of music...
.

"Subdominant" also refers to a relationship of musical keys. For example, relative to the key of C major, the key of F major is the subdominant. Music which modulates (changes key) often modulates into the subdominant when the leading tone is lowered by a half step to the subtonic
Subtonic
In music, the subtonic or flattened seventh is the lowered or minor seventh degree of the scale, a whole step below the tonic, as opposed to the leading tone...
(B to B in the key of C). Modulation into the subdominant key often creates a sense of musical relaxation; as opposed to modulation into dominant
Dominant (music)
In music, the dominant is the fifth scale degree of the diatonic scale, called "dominant" because it is next in importance to the tonic,and a dominant chord is any chord built upon that pitch, using the notes of the same diatonic scale...
(fifth note of the scale), which increases tension.

In sonata form
Sonata form
Sonata form is a large-scale musical structure used widely since the middle of the 18th century . While it is typically used in the first movement of multi-movement pieces, it is sometimes used in subsequent movements as well—particularly the final movement...
, the subdominant key plays a subordinate though still crucial role: typically, in the recapitulation
Recapitulation (music)
In music theory, the recapitulation is one of the sections of a movement written in sonata form. The recapitulation occurs after the movement's development section, and typically presents once more the musical themes from the movement's exposition...
, there is a section written in the subdominant key, occurring at the point corresponding to the location in the exposition where the music modulated into the dominant key. The use of the subdominant in this location often serves as a way of keeping the rest of recapitulation in the tonic. 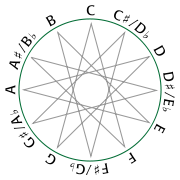 As with other chords which may or tend to precede the dominant the subdominant diatonic function
Diatonic function
In tonal music theory, a diatonic function is the specific, recognized role of each of the 7 notes and their chords in relation to the diatonic key...
acts as a dominant preparation
Predominant
In music theory, a predominant chord is any chord which normally resolves to a dominant chord. Examples of predominant chords are the subdominant , supertonic , Neapolitan sixth and German sixth. Other examples are the submediant , secondary dominant , iv and ii°...
or predominant. In theories after Hugo Riemann
Hugo Riemann
Karl Wilhelm Julius Hugo Riemann was a German music theorist.-Biography:Riemann was born at Grossmehlra, Schwarzburg-Sondershausen. He was educated in theory by Frankenberger, studied the piano with Barthel and Ratzenberger, studied law, and finally philosophy and history at Berlin and Tübingen...
it is considered to balance the dominant around the tonic (being as far below the tonic as the dominant is above).
The source of this article is wikipedia, the free encyclopedia.  The text of this article is licensed under the GFDL.