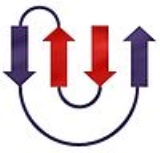 Encyclopedia
In a chain-like
Polymer
A polymer is a large molecule composed of repeating structural units. These subunits are typically connected by covalent chemical bonds...
biological molecule
Molecule
A molecule is an electrically neutral group of at least two atoms held together by covalent chemical bonds. Molecules are distinguished from ions by their electrical charge...
, such as a protein
Protein
Proteins are biochemical compounds consisting of one or more polypeptides typically folded into a globular or fibrous form, facilitating a biological function. A polypeptide is a single linear polymer chain of amino acids bonded together by peptide bonds between the carboxyl and amino groups of...
or nucleic acid
Nucleic acid
Nucleic acids are biological molecules essential for life, and include DNA and RNA . Together with proteins, nucleic acids make up the most important macromolecules; each is found in abundance in all living things, where they function in encoding, transmitting and expressing genetic information...
, a structural motif is a supersecondary structure
Supersecondary structure
A supersecondary structure is a compact three-dimensional protein structure of several adjacent elements of secondary structure that is smaller than a protein domain or a subunit. Supersecondary structures can act as nucleations in the process of protein folding. Examples include β-hairpins,...
, which appears also in a variety of other molecules. Motifs do not allow us to predict the biological functions because they are found in proteins and enzymes with dissimilar functions

Because the relationship between primary structure
Primary structure
The primary structure of peptides and proteins refers to the linear sequence of its amino acid structural units. The term "primary structure" was first coined by Linderstrøm-Lang in 1951...
and tertiary structure is not straightforward, two biopolymers may share the same motif yet lack appreciable primary structure similarity. In other words, a structural motif does not have to be associated with a sequence motif
Sequence motif
In genetics, a sequence motif is a nucleotide or amino-acid sequence pattern that is widespread and has, or is conjectured to have, a biological significance...
. Also, the existence of a sequence motif does not necessarily imply a distinctive structure. In most DNA motifs, for example, it is assumed that the DNA of that sequence does not deviate from the normal "double helical
DNA
Deoxyribonucleic acid is a nucleic acid that contains the genetic instructions used in the development and functioning of all known living organisms . The DNA segments that carry this genetic information are called genes, but other DNA sequences have structural purposes, or are involved in...
" structure.

In proteins, structure motifs usually consist of just a few elements; e.g., the 'helix-turn-helix' has just three. Note that, while the spatial sequence of elements is the same in all instances of a motif, they may be encoded in any order within the underlying gene
Gene
A gene is a molecular unit of heredity of a living organism. It is a name given to some stretches of DNA and RNA that code for a type of protein or for an RNA chain that has a function in the organism. Living beings depend on genes, as they specify all proteins and functional RNA chains...
. Protein structural motifs often include loops of variable length and unspecified structure, which in effect create the "slack" necessary to bring together in space two elements that are not encoded by immediately adjacent DNA sequence
DNA sequence
The sequence or primary structure of a nucleic acid is the composition of atoms that make up the nucleic acid and the chemical bonds that bond those atoms. Because nucleic acids, such as DNA and RNA, are unbranched polymers, this specification is equivalent to specifying the sequence of...
s in a gene. Note also that, even when two genes encode secondary structural elements of a motif in the same order, they may specify somewhat different sequences of amino acid
Amino acid
Amino acids are molecules containing an amine group, a carboxylic acid group and a side-chain that varies between different amino acids. The key elements of an amino acid are carbon, hydrogen, oxygen, and nitrogen...
s. This is true not only because of the complicated relationship between tertiary and primary structure but also because the size of the elements varies from one protein and the next.


Examples of motif types in proteins


Extremely common. Two antiparallel
Antiparallel (biochemistry)
In biochemistry, two molecules are antiparallel if they run side-by-side in opposite directions or when both strands are complimentary to each other....
beta strands connected by a tight turn of a few amino acids between them.

4 beta strands folded over into a sandwich shape.

a loop in which the residues that make up the beginning and end of the loop are very close together.

Consists of alpha helices
Helix
A helix is a type of smooth space curve, i.e. a curve in three-dimensional space. It has the property that the tangent line at any point makes a constant angle with a fixed line called the axis. Examples of helixes are coil springs and the handrails of spiral staircases. A "filled-in" helix – for...
bound by a looping stretch of amino acids. This motif is seen in transcription factors.

Two beta strands with an alpha helix end folded over to bind a zinc ion
Ion
An ion is an atom or molecule in which the total number of electrons is not equal to the total number of protons, giving it a net positive or negative electrical charge. The name was given by physicist Michael Faraday for the substances that allow a current to pass between electrodes in a...
. Important in DNA binding proteins.