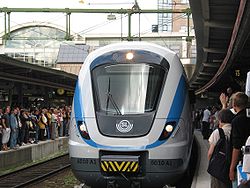 SL has its origins in AB Stockholms Spårvägar (SS), a city-owned public transit company which started in 1915 by the City of Stockholm with the aim to de-privatize the two separate private tramway networks into one more efficient company. SS would in the late 1920s also acquire private motorbus companies. The first part of the Stockholm Metro
Stockholm Metro
The Stockholm Metro is a metro system in Stockholm, Sweden. The first line opened in 1950, and today the system has 100 stations in use, of which 47 are underground and 53 above ground. There are seven lines numbered from 10 to 19, in three groups identified by a color: the Green, Red and Blue lines...
was opened in 1950. SS was renamed to SL in January 1967 when the metro, local train, and bus operations in Stockholm County
Stockholm County
Stockholm County is a county or län on the Baltic sea coast of Sweden. It borders Uppsala County and Södermanland County. It also borders Mälaren and the Baltic Sea. The city of Stockholm is the capital of Sweden. Stockholm County is divided by the historic provinces of Uppland and Södermanland...
was gathered in a single organisation under the supervision of Stockholm County Council. The different mass transit systems within the County had until then been run by different organisations, Statens Järnvägar
Statens Järnvägar
The Swedish State Railways or SJ, originally the Royal Railway Board , is a former government agency responsible for operating the state railways in Sweden....
, private companies and companies owned by the local municipalities.

The contractors used by SL are as of January 2010 the following.