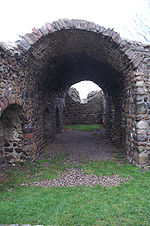 Stolpe Abbey was the first monastery
Monastery
Monastery denotes the building, or complex of buildings, that houses a room reserved for prayer as well as the domestic quarters and workplace of monastics, whether monks or nuns, and whether living in community or alone .Monasteries may vary greatly in size – a small dwelling accommodating only...
in Pomerania
Pomerania
Pomerania is a historical region on the south shore of the Baltic Sea. Divided between Germany and Poland, it stretches roughly from the Recknitz River near Stralsund in the West, via the Oder River delta near Szczecin, to the mouth of the Vistula River near Gdańsk in the East...
. It was located on the southern bank of the Peene
Peene
The Peene is a river in Germany. The Westpeene, Kleine Peene and Ostpeene flow into the Kummerower See, and from there as Peene proper to Anklam and into the Oder Lagoon....
River between Gützkow
Gützkow
Gützkow is a town in the Vorpommern-Greifswald district, in Mecklenburg-Western Pomerania, Germany. It is situated 18 km south of Greifswald at the Peene River's northern bank. Gützkow was the center of the medieval County of Gützkow.-History:...
and Anklam
Anklam
Anklam is a town in the Western Pomerania region of Mecklenburg-Vorpommern, Germany. It is situated on the banks of the Peene river, just 8 km from its mouth in the Kleines Haff, the western part of the Stettin Lagoon. Anklam has a population of 14,603 and was the capital of the former...
near the village of Stolpe
Stolpe, Ostvorpommern
Stolpe is a municipality in the Vorpommern-Greifswald district, in Mecklenburg-Vorpommern, Germany. Nearby are the ruins of Stolpe Abbey....
.

The abbey was settled by Benedictine monks from Berge Abbey near Magdeburg
Magdeburg
Magdeburg , is the largest city and the capital city of the Bundesland of Saxony-Anhalt, Germany. Magdeburg is situated on the Elbe River and was one of the most important medieval cities of Europe....
. The Pomeranian dukes and the Counts of Gützkow granted the new foundation extensive lands in the vicinity. In 1164, a meeting between the Duke of Saxony
Duchy of Saxony
The medieval Duchy of Saxony was a late Early Middle Ages "Carolingian stem duchy" covering the greater part of Northern Germany. It covered the area of the modern German states of Bremen, Hamburg, Lower Saxony, North Rhine-Westphalia, and Saxony-Anhalt and most of Schleswig-Holstein...
, Henry the Lion
Henry the Lion
Henry the Lion was a member of the Welf dynasty and Duke of Saxony, as Henry III, from 1142, and Duke of Bavaria, as Henry XII, from 1156, which duchies he held until 1180....
, and King Valdemar I of Denmark
Valdemar I of Denmark
Valdemar I of Denmark , also known as Valdemar the Great, was King of Denmark from 1157 until 1182.-Biography:...
was held here.

In 1304, the abbey became part of the Cistercian Order, and was made a daughter house of Pforta Abbey. In 1305, Kärkna Abbey
Kärkna Abbey
Kärkna Abbey is a former Cistercian monastery in Estonia.- Situation :The monastery lies about 8 km north of Tartu in the village of Lammiku near the point where the Amme River flows into the Emajõgi River.- History :...
(also known as Falkenau Abbey) and in 1319 Padise Abbey
Padise Abbey
Padise Abbey was a former Cistercian monastery in Padise in Harju County, Estonia, settled in 1310 by the dispossessed monks of Dünamünde Abbey in Latvia. It was converted into a fortress after its dissolution in 1559 and later used as a country house until 1766...
, both in Estonia
Estonia
Estonia , officially the Republic of Estonia , is a state in the Baltic region of Northern Europe. It is bordered to the north by the Gulf of Finland, to the west by the Baltic Sea, to the south by Latvia , and to the east by Lake Peipsi and the Russian Federation . Across the Baltic Sea lies...
, were put under the authority of Stolpe.