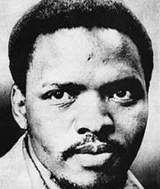 Overview
Stephen Biko was a noted anti-apartheid activist in South Africa
South Africa
The Republic of South Africa is a country in southern Africa. Located at the southern tip of Africa, it is divided into nine provinces, with of coastline on the Atlantic and Indian oceans...
in the 1960s and 1970s. A student leader, he later founded the Black Consciousness Movement
Black Consciousness Movement
The Black Consciousness Movement was a grassroots anti-Apartheid activist movement that emerged in South Africa in the mid-1960s out of the political vacuum created by the jailing and banning of the African National Congress and Pan Africanist Congress leadership after the Sharpeville Massacre in...
which would empower and mobilize much of the urban black population. Since his death in police custody, he has been called a martyr
Martyr
A martyr is somebody who suffers persecution and death for refusing to renounce, or accept, a belief or cause, usually religious.-Meaning:...
of the anti-apartheid movement. While living, his writings and activism attempted to empower black people, and he was famous for his slogan "black is beautiful", which he described as meaning: "man, you are okay as you are, begin to look upon yourself as a human being".

What were the social and political beliefs of Steve Biko

What are stepehen biko philosophy on: 1.education for development in africa 2.contending perspective of development and underdevelopment 3.leadersh...
More

The basic tenet of black consciousness is that the black man must reject all value systems that seek to make him a foreigner in the country of his birth and reduce his basic human dignity.

Apartheid — both petty and grand — is obviously evil. Nothing can justify the arrogant assumption that a clique of foreigners has the right to decide on the lives of a majority.

The system concedes nothing without demand, for it formulates its very method of operation on the basis that the ignorant will learn to know, the child will grow into an adult and therefore demands will begin to be made. It gears itself to resist demands in whatever way it sees fit.

The Quest for a True Humanity

In time, we shall be in a position to bestow on South Africa the greatest possible gift&mdash;a more human face.

We must realise that prophetic cry of black students: "Black man you are on your own!"

The Quest for a True Humanity
More
x