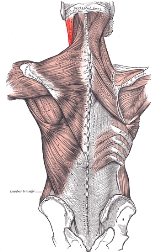 Encyclopedia
In human
Human
Humans are the only living species in the Homo genus...
anatomy
Anatomy
Anatomy is a branch of biology and medicine that is the consideration of the structure of living things. It is a general term that includes human anatomy, animal anatomy , and plant anatomy...
, the sternocleidomastoid muscle (icon), also known as sternomastoid and commonly abbreviated as SCM, is a paired muscle in the superficial
Superficial
Superficial may refer to:*Superficial , an album by Heidi Montag*"Superficial" *The Superficial, a website devoted to celebrity gossip...
layers of the anterior portion of the neck
Neck
The neck is the part of the body, on many terrestrial or secondarily aquatic vertebrates, that distinguishes the head from the torso or trunk. The adjective signifying "of the neck" is cervical .-Boner anatomy: The cervical spine:The cervical portion of the human spine comprises seven boney...
. It acts to flex and rotate the head.

It is given the name sternocleidomastoid because it originates at the manubrium
Manubrium
The manubrium or manubrium sterni is the broad, upper part of the sternum. Located ventrally with a quadrangular shape, wider superiorly and narrower inferiorly, it articulates with the clavicles and the first two ribs.-Borders:The superior border is the thickest and presents at its center the...
of the sternum (sterno-) and the clavicle
Clavicle
In human anatomy, the clavicle or collar bone is a long bone of short length that serves as a strut between the scapula and the sternum. It is the only long bone in body that lies horizontally...
(cleido-), and has an insertion
Insertion (anatomy)
Insertion is the point at which a muscle attaches to the skin, a bone, or another muscle. The insertion attaches to the structure that will be moved by the contraction of the muscle. Insertions are usually connections of muscle via tendon to bone. The opposite end of the muscle is called the origin....
at the mastoid process
Mastoid process
The mastoid process is a conical prominence projecting from the undersurface of the mastoid portion of the temporal bone. It is located just behind the external acoustic meatus, and lateral to the styloid process...
of the temporal bone
Temporal bone
The temporal bones are situated at the sides and base of the skull, and lateral to the temporal lobes of the cerebrum.The temporal bone supports that part of the face known as the temple.-Parts:The temporal bone consists of four parts:* Squama temporalis...
of the skull
Human skull
The human skull is a bony structure, skeleton, that is in the human head and which supports the structures of the face and forms a cavity for the brain.In humans, the adult skull is normally made up of 22 bones...
.

The sternocleidomastoid passes obliquely across the side of the neck.

It is thick and narrow at its central part, but broader and thinner at either end.

The two heads are separated from one another at their origins by a triangular interval, but gradually blend, below the middle of the neck, into a thick, rounded muscle which is inserted, by a strong tendon, into the lateral surface of the mastoid process
Mastoid process
The mastoid process is a conical prominence projecting from the undersurface of the mastoid portion of the temporal bone. It is located just behind the external acoustic meatus, and lateral to the styloid process...
, from its apex to its superior border, and by a thin aponeurosis
Aponeurosis
Aponeuroses are layers of flat broad tendons. They have a shiny, whitish-silvery color, are histologically similar to tendons, and are very sparingly supplied with blood vessels and nerves. When dissected, aponeuroses are papery, and peel off by sections...
into the lateral half of the superior nuchal line of the occipital bone
Occipital bone
The occipital bone, a saucer-shaped membrane bone situated at the back and lower part of the cranium, is trapezoidal in shape and curved on itself...
. The function of this muscle is to rotate the head to the opposite side or obliquely rotate the head. It also flexes the neck.

The sternocleidomastoid varies much in the extent of its origin from the clavicle: in some cases the clavicular head may be as narrow as the sternal; in others it may be as much as 7.5 centimetres (3 in) in breadth.

When the clavicular origin is broad, it is occasionally subdivided into several slips, separated by narrow intervals. More rarely, the adjoining margins of the sternocleidomastoid and trapezius are in contact. This would leave no posterior triangle.

The sternocleidomastoid is within the investing fascia of the neck, along with the trapezius muscle, with which it shares its nerve supply (the accessory nerve
Accessory nerve
In anatomy, the accessory nerve is a nerve that controls specific muscles of the shoulder and neck. As part of it was formerly believed to originate in the brain, it is considered a cranial nerve...
). Anterior to sternocleidomastoid is the anterior triangle. Posterior to it is the posterior triangle. 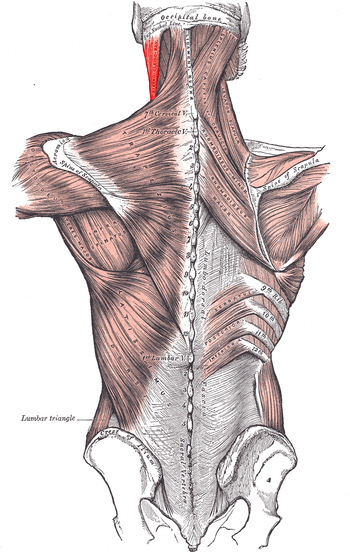