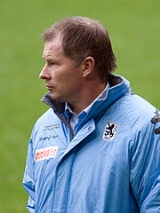 Encyclopedia
Stefan Reuter is a German
Germany
Germany , officially the Federal Republic of Germany , is a federal parliamentary republic in Europe. The country consists of 16 states while the capital and largest city is Berlin. Germany covers an area of 357,021 km2 and has a largely temperate seasonal climate...
football coach
Coach (sport)
In sports, a coach is an individual involved in the direction, instruction and training of the operations of a sports team or of individual sportspeople.-Staff:...
and former player.

A proposed move to Liverpool F.C following West Germany's victorious World Cup campaign was turned down at the last minute with Reuter following many of his compatriots to Italy. From 1990 to 1991 he played for Juventus F.C.
Juventus F.C.
Juventus Football Club S.p.A. , commonly referred to as Juventus and colloquially as Juve , are a professional Italian association football club based in Turin, Piedmont...
(28 games), but turned back soon to Germany and played for Borussia Dortmund
Borussia Dortmund
Ballspielverein Borussia Dortmund, commonly BVB, are a German sports club based in Dortmund, North Rhine-Westphalia. Dortmund are one of the most successful clubs in German football history. Borussia Dortmund play in the Bundesliga, the top league of German football...
. Until the ending of his career he played 307 games for Dortmund and scored 11 goals in the Bundesliga.

In 1992 Reuter became the first player in the European Championship history to be substituted as a substitute, when during the match between Germany and Scotland, he replaced Karlheinz Riedle
Karlheinz Riedle
Karl-Heinz "Air" Riedle is a former German professional footballer, who won the FIFA World Cup with West Germany in 1990 and the UEFA Champions League in 1997 with Borussia Dortmund. Riedle ended his international career with 42 caps and 16 goals.Riedle's youth clubs are TSV Ellhofen and SV Weiler...
but then only seven minutes later he had to leave the field due to an injury, and was replaced by Michael Schulz
Michael Schulz
Michael Schulz is a retired German soccer player. He played 243 matches in the Bundesliga for Borussia Dortmund, Werder Bremen and 1. FC Kaiserslautern and scored eight goals....
.

Reuter served as team manager for TSV 1860 München
TSV 1860 München
Turn- und Sportverein München von 1860, commonly known as TSV 1860 München or 1860 Munich, is a German sports club based in Munich, Bavaria. The club's football team plays in the Second Bundesliga, after relegation from the Bundesliga following the 2003–04 season...
from January 2006 to 2 February 2009 when he was removed from the job.