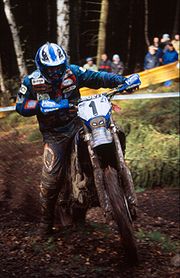 Stefan Merriman is a New Zealand
New Zealand
New Zealand is an island country in the south-western Pacific Ocean comprising two main landmasses and numerous smaller islands. The country is situated some east of Australia across the Tasman Sea, and roughly south of the Pacific island nations of New Caledonia, Fiji, and Tonga...
-born Australia
Australia
Australia , officially the Commonwealth of Australia, is a country in the Southern Hemisphere comprising the mainland of the Australian continent, the island of Tasmania, and numerous smaller islands in the Indian and Pacific Oceans. It is the world's sixth-largest country by total area...
n enduro
Enduro
Enduro is a form of motorcycle sport run on courses that are predominantly off-road. Enduro consists of many different obstacles and challenges...
rider competing in the World Enduro Championship
World Enduro Championship
The FIM World Enduro Championship is the world championship series for enduro, a popular form of off-road motorcycle sport. The championship currently features three classes , along with separate categories for junior and female riders. The WEC was first organized in 1990, and currently consists...
. He won the championship in 2000 (250cc), 2001 (400cc), 2003 (250cc) and 2004 (Enduro 1).