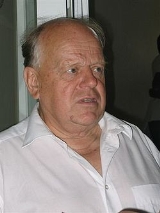 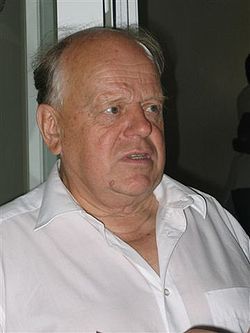 Stanislau Stanislavavich Shushkevich ' onMouseout='HidePop("38634")' href="/topics/Minsk">Minsk
Minsk
- Ecological situation :The ecological situation is monitored by Republican Center of Radioactive and Environmental Control .During 2003–2008 the overall weight of contaminants increased from 186,000 to 247,400 tons. The change of gas as industrial fuel to mazut for financial reasons has worsened...
) is a Belarus
Belarus
Belarus , officially the Republic of Belarus, is a landlocked country in Eastern Europe, bordered clockwise by Russia to the northeast, Ukraine to the south, Poland to the west, and Lithuania and Latvia to the northwest. Its capital is Minsk; other major cities include Brest, Grodno , Gomel ,...
ian politician
Politician
A politician, political leader, or political figure is an individual who is involved in influencing public policy and decision making...
and scientist
Scientist
A scientist in a broad sense is one engaging in a systematic activity to acquire knowledge. In a more restricted sense, a scientist is an individual who uses the scientific method. The person may be an expert in one or more areas of science. This article focuses on the more restricted use of the word...
. From September 28, 1991 to January 26, 1994 he was the first leader and head of state
Head of State
A head of state is the individual that serves as the chief public representative of a monarchy, republic, federation, commonwealth or other kind of state. His or her role generally includes legitimizing the state and exercising the political powers, functions, and duties granted to the head of...
of independent Belarus after the dissolution of the Soviet Union
Dissolution of the Soviet Union
The dissolution of the Soviet Union was the disintegration of the federal political structures and central government of the Union of Soviet Socialist Republics , resulting in the independence of all fifteen republics of the Soviet Union between March 11, 1990 and December 25, 1991...
(Chairman of the Supreme Soviet - also chairman of Parliament). He supported free market
Free market
A free market is a competitive market where prices are determined by supply and demand. However, the term is also commonly used for markets in which economic intervention and regulation by the state is limited to tax collection, and enforcement of private ownership and contracts...
and democratic reforms and played a key role in the creation of the Commonwealth of Independent States
Commonwealth of Independent States
The Commonwealth of Independent States is a regional organization whose participating countries are former Soviet Republics, formed during the breakup of the Soviet Union....
.

Before his presidency he was a Belarusian scientist, Corresponding Member of the Belarusian Academy of Sciences, Doctor in Physics and Mathematics, recipient of various state awards, professor, and the author and originator of award-winning textbooks and over 150 articles and 50 inventions which have, however, very low citation by his peers.

On December 8, 1991, in Belavezhskaya Pushcha and together with the leaders of Russia (Boris Yeltsin
Boris Yeltsin
Boris Nikolayevich Yeltsin was the first President of the Russian Federation, serving from 1991 to 1999.Originally a supporter of Mikhail Gorbachev, Yeltsin emerged under the perestroika reforms as one of Gorbachev's most powerful political opponents. On 29 May 1990 he was elected the chairman of...
) and Ukraine (Leonid Kravchuk
Leonid Kravchuk
Leonid Makarovych Kravchuk is a Ukrainian politician, the first President of Ukraine serving from December 5, 1991 until his resignation on July 19, 1994, a former Chairman of the Verkhovna Rada and People's Deputy of Ukraine serving in the Social Democratic Party of Ukraine faction.After a...
), he signed a declaration that the Soviet Union
Soviet Union
The Soviet Union , officially the Union of Soviet Socialist Republics , was a constitutionally socialist state that existed in Eurasia between 1922 and 1991....
was dissolved and replaced by the Commonwealth of Independent States
Commonwealth of Independent States
The Commonwealth of Independent States is a regional organization whose participating countries are former Soviet Republics, formed during the breakup of the Soviet Union....
; the declaration later became known as the "Belavezha Accords
Belavezha Accords
The Belavezha Accords is the agreement which declared the Soviet Union effectively dissolved and established the Commonwealth of Independent States in its place...
".

Shushkevich withdrew from Belarus the vestigial Soviet nuclear arsenal (both tactical and strategic), without preconditions or compensation from Russia or the West. However, other reforms became stalled due to the opposition from a hostile parliament as well as from Prime Minister Vyacheslav Kebich.

In late 1993, Alexander Lukashenko
Alexander Lukashenko
Alexander Grigoryevich Lukashenko has been serving as the President of Belarus since 20 July 1994. Before his career as a politician, Lukashenko worked as director of a state-owned agricultural farm. Under Lukashenko's rule, Belarus has come to be viewed as a state whose conduct is out of line...
, the then-chairman of the anti-corruption committee of the Belarusian parliament, accused 70 senior government officials, including Shushkevich, of corruption, including stealing state funds for personal purposes. Lukashenko's accusations forced a vote of confidence, which Shushkevich lost. Shushkevich was replaced by Vyacheslau Kuznyatsou and later by Myechyslau Hryb.

Further investigation revealed that the accusations against Shushkevich were false.

In July, 1994 the first direct presidential elections were held in Belarus. Six candidates stood, including Lukashenko, Shushkevich and Kebich, with the latter regarded as the clear favorite. In the first round Lukashenko won 45% of the vote against 17% for Kebich, 13% for Paznyak and only 10% for Shushkevich.

In 2002 the world learned about a highly unusual court case. Shushkevich sued the Belarusian Ministry of Labor and Social Security: due to inflation, his retirement pension as a former head of state was the equivalent of one dollar
United States dollar
The United States dollar , also referred to as the American dollar, is the official currency of the United States of America. It is divided into 100 smaller units called cents or pennies....
and 80 cents monthly. To earn income, Shushkevich lectures extensively in foreign universities including in Poland
Poland
Poland , officially the Republic of Poland , is a country in Central Europe bordered by Germany to the west; the Czech Republic and Slovakia to the south; Ukraine, Belarus and Lithuania to the east; and the Baltic Sea and Kaliningrad Oblast, a Russian exclave, to the north...
, the United States
United States
The United States of America is a federal constitutional republic comprising fifty states and a federal district...
and Asian countries.