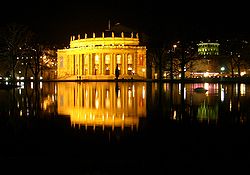 The Staatsoper Stuttgart (Stuttgart State Opera) is a German opera
Opera
Opera is an art form in which singers and musicians perform a dramatic work combining text and musical score, usually in a theatrical setting. Opera incorporates many of the elements of spoken theatre, such as acting, scenery, and costumes and sometimes includes dance...
company based in Stuttgart
Stuttgart
Stuttgart is the capital of the state of Baden-Württemberg in southern Germany. The sixth-largest city in Germany, Stuttgart has a population of 600,038 while the metropolitan area has a population of 5.3 million ....
, Germany.

The Stuttgart Staatsoper forms part of the Stuttgart State Theatre (Staatstheater Stuttgart
Staatstheater Stuttgart
The Staatstheater Stuttgart ' is an opera house in Stuttgart, Germany. It is also known locally as the Grosses Haus, having been the larger of two theatres of the former Königliche Hoftheater....
), which is a a three-branch-theatre complex (opera, playhouse and ballet) and represents the largest theatre of its kind in Europe. The opera house itself, formerly known locally as the Grosses Haus, was designed by Max Littmann
Max Littmann
Max Littmann was a German architect.Littmann was educated in the Gewerbeakademie Chemnitz and the Technische Hochschule Dresden...
and opened in 1912 with the world premiere of Richard Strauss' "Ariadne auf Naxos". The house, which has been a listed building since 1924, currently has 1,404 seats and a per-season audience of approximately 250,000. The opera house building is one of the few major German opera houses not to be destroyed in the World War II
World War II
World War II, or the Second World War , was a global conflict lasting from 1939 to 1945, involving most of the world's nations—including all of the great powers—eventually forming two opposing military alliances: the Allies and the Axis...
. The smaller playhouse ("Kleines Haus") of the complex was destroyed in the war and replaced by a modern building, built between 1959 and 1962. The opera house is also home to the Stuttgart Ballet
Stuttgart Ballet
Stuttgart Ballet was the first major German ballet company. It rose to fame in the 1960s under Artistic Director John Cranko. The company, which is renowned for presentations of full-length narrative ballets including Romeo and Juliet, Eugene Onegin, The Taming of the Shrew, John Neumeier's Die...
.

An important centre for opera since the 17th century, Stuttgart has again become an important and influential centre since the war, particularly for contemporary works. Three operas by Carl Orff
Carl Orff
Carl Orff was a 20th-century German composer, best known for his cantata Carmina Burana . In addition to his career as a composer, Orff developed an influential method of music education for children.-Early life:...
received their premieres there and the company has been associated with figures such as Wieland Wagner
Wieland Wagner
Wieland Wagner was a German opera director.- Life :Wieland was the elder of two sons of Siegfried and Winifred Wagner and grandson of composer Richard Wagner....
, Günther Rennert
Günther Rennert
Günther Rennert was a German opera director and administrator.Rennert was born in Essen, Rhine Province. Starting as a film director in 1933, he then became involved in the operatic theatre, becoming an assistant to Walter Felsenstein at the Oper Frankfurt...
, Hans Werner Henze
Hans Werner Henze
Hans Werner Henze is a German composer of prodigious output best known for "his consistent cultivation of music for the theatre throughout his life"...
and Philip Glass
Philip Glass
Philip Glass is an American composer. He is considered to be one of the most influential composers of the late 20th century and is widely acknowledged as a composer who has brought art music to the public .His music is often described as minimalist, along with...
.

The company has won the Opera House of the Year
Opera house of the year
Opera House of the Year , is an award from the German monthly magazine Opernwelt. Each year since 1994, at the end of the season, a jury of 50 critics selects an opera house in Austria, Germany or German speaking Switzerland for the award....
award by the German magazine Opernwelt
Opernwelt
Opernwelt is a monthly German magazine for opera, operetta and ballet.The magazine covers news about current performances; it presents portraits of composers and performers, articles about opera houses and performance spaces, and about contemporary and historical subjects from the world of opera...
more often than any other company: in 1994 (the inaugural award), 1998, 1999, 2000, 2002 and in 2006.

Jossi Wieler became artistic director of the company in 2011, succeeding Albrecht Puhlmann. The most recent Generalmusikdirektor was Manfred Honeck
Manfred Honeck
Manfred Honeck is an Austrian conductor, the son of Otto and Frieda Honeck, from a family of nine children. One of his brothers is the Vienna Philharmonic leader Rainer Honeck....
, from 2007 to 2011. In April 2010, Wieler appointed Sylvain Cambreling
Sylvain Cambreling
Sylvain Cambreling is a French conductor. Trained as a trombone player, he studied at the Paris Conservatoire. He joined l'Orchestre Symphonique de Lyon as a trombonist in 1971. In 1974, he took second prize in the International Besançon Competition for Young Conductors...
the next music director of the company, effective with the 2012-2013 season.

Stuttgart productions of Glass
Philip Glass
Philip Glass is an American composer. He is considered to be one of the most influential composers of the late 20th century and is widely acknowledged as a composer who has brought art music to the public .His music is often described as minimalist, along with...
's Satyagraha
Satyagraha (opera)
Satyagraha is a 1979 opera in three acts for orchestra, chorus and soloists, composed by Philip Glass, with a libretto by Glass and Constance DeJong.Loosely based on the life of Mohandas K...
, Wagner
Richard Wagner
Wilhelm Richard Wagner was a German composer, conductor, theatre director, philosopher, music theorist, poet, essayist and writer primarily known for his operas...
's Der Ring des Nibelungen
Der Ring des Nibelungen
Der Ring des Nibelungen is a cycle of four epic operas by the German composer Richard Wagner . The works are based loosely on characters from the Norse sagas and the Nibelungenlied...
, Handel
George Frideric Handel
George Frideric Handel was a German-British Baroque composer, famous for his operas, oratorios, anthems and organ concertos. Handel was born in 1685, in a family indifferent to music...
's Alcina
Alcina
Alcina is an opera seria by George Frideric Handel. Handel used the libretto of L'isola di Alcina, an opera that was set in 1728 in Rome by Riccardo Broschi, which he acquired the year after, during his travels in Italy...
and Zimmermann
Bernd Alois Zimmermann
Bernd Alois Zimmermann was a post-WWII West German composer. He is perhaps best known for his opera Die Soldaten which is regarded as one of the most important operas of the 20th century...
's Die Soldaten
Die Soldaten
Die Soldaten is a four act opera in German by German composer Bernd Alois Zimmermann, based on the 1776 play by Jakob Michael Reinhold Lenz. It is dedicated to Hans Rosbaud. Zimmermann himself faithfully adapted the play into the libretto, the only changes to the text being repeats and small cuts...
have been released on DVD.