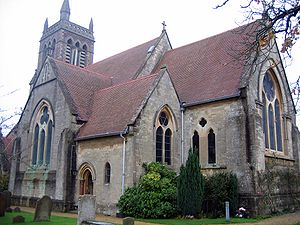 The Church of St Michael and St Mary Magdalene, is the Parish Church of Easthampstead, Berkshire. The parish of Easthampstead
Easthampstead
Easthampstead is today a southern suburb of the town of Bracknell in the English county of Berkshire, although the old village can still be easily identified around the Church of St Michael and St Mary Magdalene...
is one of the largest parishes in the Church of England
Church of England
The Church of England is the officially established Christian church in England and the Mother Church of the worldwide Anglican Communion. The church considers itself within the tradition of Western Christianity and dates its formal establishment principally to the mission to England by St...
. The ethos of the parish is one of traditional worship allied to a liberal theology and inclusive approach to both social issues and theology. The church supports a large and growing congregation with activities and study groups for all ages.

God has been worshipped on the site of the church for well over 1000 years. By tradition, St Birinus
Birinus
Birinus , venerated as a saint, was the first Bishop of Dorchester, and the "Apostle to the West Saxons".-Life and ministry:After Augustine of Canterbury performed initial conversions in England, Birinus, a Frank, came to the kingdoms of Wessex in 634, landing at the port of "Hamwic", now in the...
, the first Christian missionary to the area, baptised in the spring just west of the present Church. According to legend, it was here that Cynegils, king of the West Saxons, first accepted Christianity in AD 635. Its prominent position on a hill, coupled with the dedication to St. Michael, one of the four archangels, and destroyer of the Devil, suggests that it might have been a place of pre-Christian worship.

The church was originally at the centre of a small ancient village, situated at the eastern gate to Windsor Forest, but is now part of the new town of Bracknell
Bracknell
Bracknell is a town and civil parish in the Borough of Bracknell Forest in Berkshire, England. It lies to the south-east of Reading, southwest of Windsor and west of central London...
.

The present Parish Church was largely rebuilt in 1867, but retains many treasures from across the centuries. Rev. Osborne Gordon
Osborne Gordon
Osborne Gordon was an influential Oxford college tutor and Church of England Clergyman.- Life :Osborne Gordon was born in Broseley, Shropshire. He was educated at Bridgnorth Grammar School and Christ Church College, Oxford University. He served as proctor, censor at Christ Church and University...
, Rector of Easthampstead from 1860, organised the rebuilding of the Church as well as the enlarging of the parish schools. The work was paid for by Caroline, Marchioness of Devonshire, who lived at nearby Easthampstead Park
Easthampstead Park
Easthampstead Park is a Victorian mansion in the civil parish of Bracknell in the English county of Berkshire. It is currently a conference centre.-Location:...
.

There are some beautiful nineteenth stained glass windows by William Morris
William Morris
William Morris 24 March 18343 October 1896 was an English textile designer, artist, writer, and socialist associated with the Pre-Raphaelite Brotherhood and the English Arts and Crafts Movement...
and four superb windows by Sir Edward Burne-Jones, including the great east window featuring the building's patron saint at the Last Judgment (from the Book of Daniel). This is probably the artist's best work in glass to be seen anywhere.

In January 2009, major repair works to the roof were started, to deal with problems of dry rot, and damage from Death-watch beetle larvae. During this time, the congregation moved to the Roman Catholic church of St Margaret Clitherow in Bracknell.

In recognition of the wildlife interest, the churchyard was entered into the Living Churchyards and Cemeteries Project in 2002 and received an Award in 2004. Work undertaken as part of the entry into the project has included monitoring wildlife, erecting bat and bird boxes and planting wildflowers

Despite its busy urban setting, the churchyard maintains an atmosphere of calm and its grassland is a haven for wildlife. Over a hundred plant species are found here, including many traditionally found in churchyards, for example Germander speedwell (Angel’s eyes), Snowdrops (Eve’s tears) and Greater stitchwort (Easter bell).

The tombstones support a mosaic of brightly coloured lichens and mosses. Insects use the crevices present in many of the stones for shelter, and the Stag beetle, an increasingly threatened insect which is listed on the Borough’s Biodiversity Action Plan, has been spotted here.

The oldest living organism in the churchyard is the veteran yew tree near the south gate. Its girth exceeds 13 feet and in February its male cones release drifts of pollen into the wind.

During the early 2000s, phone companies applied to erect a phone mast in the Easthampstead area. After surveying was carried out, a report concluded that there was no suitable land on which to build a normal mast. Opposition to the visual impact came from local residents, who also cited health concerns over its proximity to a local school. The mast was erected but not in the conventional sense: the antennae have been placed on the four faces of the bell tower and have been disguised to look like architecture.