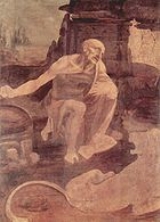 Encyclopedia
St Jerome in the Wilderness (c. 1480) is an unfinished painting by Leonardo da Vinci
Leonardo da Vinci
Leonardo di ser Piero da Vinci was an Italian Renaissance polymath: painter, sculptor, architect, musician, scientist, mathematician, engineer, inventor, anatomist, geologist, cartographer, botanist and writer whose genius, perhaps more than that of any other figure, epitomized the Renaissance...
, now in the Vatican Museums
Vatican Museums
The Vatican Museums , in Viale Vaticano in Rome, inside the Vatican City, are among the greatest museums in the world, since they display works from the immense collection built up by the Roman Catholic Church throughout the centuries, including some of the most renowned classical sculptures and...
, Rome
Rome
Rome is the capital of Italy and the country's largest and most populated city and comune, with over 2.7 million residents in . The city is located in the central-western portion of the Italian Peninsula, on the Tiber River within the Lazio region of Italy.Rome's history spans two and a half...
.

The painting depicts Saint Jerome
Jerome
Saint Jerome was a Roman Christian priest, confessor, theologian and historian, and who became a Doctor of the Church. He was the son of Eusebius, of the city of Stridon, which was on the border of Dalmatia and Pannonia...
during his retreat to the Syria
Syria
Syria , officially the Syrian Arab Republic , is a country in Western Asia, bordering Lebanon and the Mediterranean Sea to the West, Turkey to the north, Iraq to the east, Jordan to the south, and Israel to the southwest....
n desert, where he lived the life of a hermit
Hermit
A hermit is a person who lives, to some degree, in seclusion from society.In Christianity, the term was originally applied to a Christian who lives the eremitic life out of a religious conviction, namely the Desert Theology of the Old Testament .In the...
. St Jerome kneels in a rocky landscape, gazing toward a crucifix which can be discerned faintly sketched in at the extreme right of the painting. In Jerome's right hand he holds a rock with which he is traditionally shown beating his chest in penance. At his feet is the lion which became a loyal companion after he extracted a thorn from its paw. The lion, the stone and a cardinal's hat are the traditional attributes of the saint.

On the left-hand side of the panel the background is a distant landscape of a lake surrounded by precipitous mountains shrouded in mist. To the right-hand side, the only discernible feature is a faintly-sketched church, seen through the opening in the rocks. The church's presence may allude to Jerome's position in Western Christianity as one of the Doctors of the Church
Doctor of the Church
Doctor of the Church is a title given by a variety of Christian churches to individuals whom they recognize as having been of particular importance, particularly regarding their contribution to theology or doctrine.-Catholic Church:In the Catholic Church, this name is given to a saint from whose...
.

The composition of the painting is innovative for the oblique trapezoid
Trapezoid
In Euclidean geometry, a convex quadrilateral with one pair of parallel sides is referred to as a trapezoid in American English and as a trapezium in English outside North America. A trapezoid with vertices ABCD is denoted...
form of the figure of the saint. The angular forms contrast with the sinuous form of the lion which transcribes an "S" across the bottom of the painting. The form of St Jerome prefigures that of the Virgin Mary in the Madonna of the Rocks. The anatomy of the saint relates to a page of anatomical drawings of the shoulder girdle.

The panel has been reduced in size and the remaining part was cut in two at some point in its history and was reassembled for the early 19th-century collector, Cardinal Fesch
Joseph Fesch
Joseph Fesch was a French cardinal, closely associated with the family of Napoleon Bonaparte. He was also one of the most famous art collectors of his period.-Biography:Fesch was born at Ajaccio in Corsica...
, the uncle of Napoleon Bonaparte
Napoleon I of France
Napoleon Bonaparte was a French military and political leader during the latter stages of the French Revolution.As Napoleon I, he was Emperor of the French from 1804 to 1815...
. Popular legend has it that the Cardinal discovered the part of the panel with the saint’s torso being offered as a table-top in a shop in Rome. Many years later, he found another piece being used as a wedge for shoemaker’s bench. Whatever the circumstances of Fesch's finding the parts, the repaired panel was sold by his descendants to Pope Pius IX
Pope Pius IX
Blessed Pope Pius IX , born Giovanni Maria Mastai-Ferretti, was the longest-reigning elected Pope in the history of the Catholic Church, serving from 16 June 1846 until his death, a period of nearly 32 years. During his pontificate, he convened the First Vatican Council in 1869, which decreed papal...
, who installed it in the Pinacoteca Vaticana, now part of the Vatican Museums
Vatican Museums
The Vatican Museums , in Viale Vaticano in Rome, inside the Vatican City, are among the greatest museums in the world, since they display works from the immense collection built up by the Roman Catholic Church throughout the centuries, including some of the most renowned classical sculptures and...
. The St. Jerome was once believed to have been part of the collection of the painter Angelika Kauffmann, but this theory too has been rejected by recent scholars.
The source of this article is wikipedia, the free encyclopedia.  The text of this article is licensed under the GFDL.