The process of spermiogenesis is traditionally divided into four stages: the Golgi phase, the cap phase,formation of tail , and the maturation stage.

The spermatids, which up until now have been mostly radially symmetrical
Symmetry (biology)
Symmetry in biology is the balanced distribution of duplicate body parts or shapes. The body plans of most multicellular organisms exhibit some form of symmetry, either radial symmetry or bilateral symmetry or "spherical symmetry". A small minority exhibit no symmetry .In nature and biology,...
, begin to develop polarity.


Spermatid DNA
DNA
Deoxyribonucleic acid is a nucleic acid that contains the genetic instructions used in the development and functioning of all known living organisms . The DNA segments that carry this genetic information are called genes, but other DNA sequences have structural purposes, or are involved in...
also undergoes packaging, becoming highly condensed. The DNA is packaged first, with specific nuclear basic proteins, which are subsequently replaced with protamine
Protamine
Protamines are small, arginine-rich, nuclear proteins that replace histones late in the haploid phase of spermatogenesis and are believed essential for sperm head condensation and DNA stabilization. They may allow for denser packaging of DNA in spermatozoon than histones, but they must be...
s during spermatid elongation. The resultant tightly packed chromatin
Chromatin
Chromatin is the combination of DNA and proteins that make up the contents of the nucleus of a cell. The primary functions of chromatin are; to package DNA into a smaller volume to fit in the cell, to strengthen the DNA to allow mitosis and meiosis and prevent DNA damage, and to control gene...
is transcriptionally inactive.

The Golgi apparatus surrounds the condensed nucleus, becoming the acrosomal cap
Acrosome
The acrosome is an organelle that develops over the anterior half of the head in the spermatozoa of many animals. It is a cap-like structure derived from the Golgi apparatus. Acrosome formation is completed during testicular maturation. In Eutherian mammals the acrosome contains digestive enzymes...
. 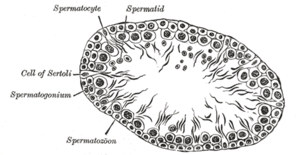 One of the centriole
Centriole
A Centriole is a barrel-shaped cell structure found in most animal eukaryotic cells, though it is absent in higher plants and most fungi. The walls of each centriole are usually composed of nine triplets of microtubules...
s of the cell elongates to become the tail of the sperm. A temporary structure called the "manchette
Manchette
A manchette is a term used to describe a sleeve or glove covering the hand or forearm or as a printing term to describe a vertical heading within a newspaper or similar publication...
" assists in this elongation.

During this phase, the developing spermatozoa orient themselves so that their tails point towards the center of the lumen, away from the epithelium.

The excess cytoplasm
Cytoplasm
The cytoplasm is a small gel-like substance residing between the cell membrane holding all the cell's internal sub-structures , except for the nucleus. All the contents of the cells of prokaryote organisms are contained within the cytoplasm...
, known as residual bodies, is phagocytosed by surrounding Sertoli cells in the testes.

The mature spermatozoa are released from the protective Sertoli cell
Sertoli cell
A Sertoli cell is a 'nurse' cell of the testes that is part of a seminiferous tubule.It is activated by follicle-stimulating hormone and has FSH-receptor on its membranes.-Functions:...
s into the lumen of the seminiferous tubule and a process called spermiation then takes place, which removes the remaining unnecessary cytoplasm
Cytoplasm
The cytoplasm is a small gel-like substance residing between the cell membrane holding all the cell's internal sub-structures , except for the nucleus. All the contents of the cells of prokaryote organisms are contained within the cytoplasm...
and organelles.

The resulting spermatozoa are now mature but lack motility, rendering them sterile. The non-motile spermatozoa are transported to the epididymis
Epididymis
The epididymis is part of the male reproductive system and is present in all male amniotes. It is a narrow, tightly-coiled tube connecting the efferent ducts from the rear of each testicle to its vas deferens. A similar, but probably non-homologous, structure is found in cartilaginous...
in testicular fluid secreted by the Sertoli cells with the aid of peristaltic contraction
Peristalsis
Peristalsis is a radially symmetrical contraction and relaxation of muscles which propagates in a wave down the muscular tube, in an anterograde fashion. In humans, peristalsis is found in the contraction of smooth muscles to propel contents through the digestive tract. Earthworms use a similar...
.

Whilst in the epididymis, they acquire motility. However, transport of the mature spermatozoa through the remainder of the male reproductive system is achieved via muscle contraction rather than the spermatozoon's motility. A glycoprotein coat over the acrosome prevents the sperm from fertilizing the egg prior to traveling through the male and female reproductive tracts. Capacitation
Capacitation
Capacitation is the penultimate step in the maturation of mammalian spermatozoa and is required to render them competent to fertilize an oocyte.This step is a biochemical event; the sperm move normally and look mature prior to capacitation....
of the sperm by the enzymes FPP (fertilization promoting peptide, produced by the male) and heparin (in the female reproductive tract) remove this coat and allow sperm to bind to the egg.