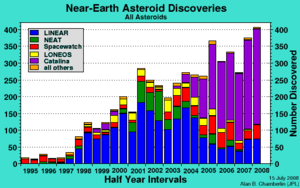 
The project also recovered 719 Albert
719 Albert
719 Albert is a Mars-crossing, Amor asteroid; it was the second one discovered after 433 Eros.-Discovery:Discovered in 1911 by Johann Palisa, the asteroid was named after one of the Imperial Observatory in Vienna's major benefactors, Albert Salomon von Rothschild, who had died some months before...
, a long-lost asteroid.