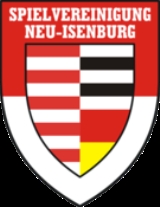 Encyclopedia
SpVgg 03 Neu-Isenburg is a German association football club
Football in Germany
Association football is the most popular sport in Germany. The German Football Association is the sport's national governing body, with 6.6 million members organized in over 26,000 football clubs. There is a league system, with the 1. and 2. Bundesliga on top, and the winner of the first...
from the city of Neu-Isenburg
Neu-Isenburg
The “Huguenot Town” of Neu-Isenburg with its outlying centres of Gravenbruch and Zeppelinheim is found in the Offenbach district in the Regierungsbezirk of Darmstadt in Hesse, Germany, right near Frankfurt am Main...
, Hesse
Hesse
Hesse or Hessia is both a cultural region of Germany and the name of an individual German state.* The cultural region of Hesse includes both the State of Hesse and the area known as Rhenish Hesse in the neighbouring Rhineland-Palatinate state...
. The roots of the club are in the founding of Freispielclub Neu-Isenburg on 13 June 1903. Over the next three-and-a-half decades, the association went through mergers with a number of other local clubs. In 1913, they joined Sportclub 1905 Neu-Isenburg to form Fußballverein Neu-Isenburg, which in 1921 merged with Fußball-Klub Viktoria Neu-Isenburg to become Verein für Leibesübungen 03 Neu-Isenburg.

These predecessor sides were competitive at the local level with several titles and top three finishes to their credit. The new VfL had instantenious success, winning the Kreisliga Südmain
Kreisliga Südmain
The Kreisliga Südmain was the highest association football league in parts of the German state of Hesse from 1919 to 1923. The league was disbanded with the introduction of the Bezirksliga Main in 1923....
in 1922. As a second division side VfL took part in the promotion round for the Gauliga Südwest, one of 16 regional top-flight divisions formed in the 1933 reorganization of German football under the Third Reich, in 1937 and 1938, but were unsuccessful in their attempt to advance. The club underwent another merger in 1938 joining Sportverein 1911 Neu-Isenburg to become Spielvereinigung 03 Neu-Isenburg.

SpVgg again took part in Gauliga promotion play in 1941 and 1942, finally winning their way into the Gauliga Hessen-Nassau (I) for two seasons in 1942–44. The division collapsed as World War II overtook the country. Following the conflict SpVgg, like most organizations in Germany, including sports and football clubs, was ordered disbanded by the occupying Allied forces
Allied Occupation Zones in Germany
The Allied powers who defeated Nazi Germany in World War II divided the country west of the Oder-Neisse line into four occupation zones for administrative purposes during 1945–49. In the closing weeks of fighting in Europe, US forces had pushed beyond the previously agreed boundaries for the...
. The club was reconstituted as Sportgemeinde Neu-Isenburg in 1945, before resuming its identity as SpVgg the following year.

They were part of the Landesliga Großhessen-West (II) in the 1945–46 season and beat Viktoria Aschaffenburg
Viktoria Aschaffenburg
SV Viktoria 01 Aschaffenburg is a German football club based in Aschaffenburg, Bavaria.Even though Aschaffenburg is located in Bavaria, Viktoria Aschaffenburg historically played its football in the Hessenliga and the associated Hessian leagues, rather than the Fussball-Bayernliga , against clubs...
4:1 in a qualifying match for the Oberliga Süd (I). However the result was annulled because of the use of an ineligible player by Neu-Isenburg and Aschaffenburg went on to beat two other clubs to advance. SpVgg slipped to lower level local competition before moving up to play in the Amateurliga Hessen (III) in 1953, where they captured the title in 1956.

The club enjoyed its greatest successes in the mid-50s. In 1954, they played their way to the national amateur final where they dropped a 1:6 decision to TSV Marl-Hüls. They returned to that same stage in 1956 and this time emerged victorious, beating VfB Speldorf
VfB Speldorf
VfB Speldorf is a German association football club from the city of Mülheim an der Ruhr, North Rhine-Westphalia.-Squad 2009–2010:-History:...
3:2.

Also in 1956, Neu-Isenburg successfully qualified for the 2. Liga Süd (II) where they earned a string of indifferent mid-table finishes over the course of seven seasons. Following the 1963 founding of the Bundesliga, Germany's first professional top-flight league, the second division was reorganized into northern and southern Regionalligas. Neu-Isenburg played a single season in the Regionalliga Süd (II) before being sent down to the Amateurliga Hessen (III) after a 17th place finish. They remained a third tier club through the remainder of the 60s and on into the 70s. The team advanced to the semi-finals of the amateur national championship in 1967 and then narrowly missed relegation in 1969 when they beat Tus Naunheim 2:0 in a post season match staged to determine which of the two sides would stay up. In 1974, they were relegated following an 18th place finish, but quickly rebounded after a Landesliga Hessen-Süd (IV) title. SpVgg spent only two more seasons in the Amateurliga before finally slipping away to lower level local competition. The team made its only appearance in DFB-Pokal
DFB-Pokal
The DFB-Pokal or DFB Cup is a German knockout football cup competition held annually. 64 teams participate in the competition, including all clubs from the Bundesliga and the 2nd Bundesliga. It is considered the second most important national title in German football after the Bundesliga...
(German Cup) play in 1984, going out in the second preliminary round.