Southside Place functions as a bedroom community for middle and upper-middle class families. Many businesses are located in Southside Place; all are along Bellaire Boulevard.

Southside Place opened on Easter Day in 1925. Edlo L. Crain, the developer, placed a pool and a park in a subdivision to attract residents to the townsite. The first section to open was south of the park. It was in close proximity to Bellaire Boulevard and the streetcar line, which was nicknamed the "Toonerville Trolley." In 1926, development of the second section of Southside Place, which spanned from Harper Street to University Boulevard, began. The Great Depression
Great Depression
The Great Depression was a severe worldwide economic depression in the decade preceding World War II. The timing of the Great Depression varied across nations, but in most countries it started in about 1929 and lasted until the late 1930s or early 1940s...
slowed development. The site of Southside Place previously housed the Harris County Poor Farm. The Haden and Austin company had purchased the poor farm and, after a period, sold it to the E. L. Crain and Company.

Southside Place incorporated June in 1931 with 600 residents. The city council first met on June 15 of that year. On August 3, 1934 the city council passed a resolution that declared Southside Place an incorporated city. Because of the incorporation, Houston did not incorporate Southside Place's territory into its city limits, while Houston annexed surrounding areas that were unincorporated
Unincorporated area
In law, an unincorporated area is a region of land that is not a part of any municipality.To "incorporate" in this context means to form a municipal corporation, a city, town, or village with its own government. An unincorporated community is usually not subject to or taxed by a municipal government...
. A post office opened in 1940. Before World War II
World War II
World War II, or the Second World War , was a global conflict lasting from 1939 to 1945, involving most of the world's nations—including all of the great powers—eventually forming two opposing military alliances: the Allies and the Axis...
the population stabilized around 1,400. In the 1960s the city reached a high 1,500 residents. By 1979 the number of residents fell to 1,263. In 1988 the city had 1,560 residents. In 1990 the city had 1,384 residents.

In early 2009 Southside Place announced that it will demolish its previous municipal buildings and build a new multi-story municipal complex.

As of the census
Census
A census is the procedure of systematically acquiring and recording information about the members of a given population. It is a regularly occurring and official count of a particular population. The term is used mostly in connection with national population and housing censuses; other common...
of 2000, there were 1,546 people, 618 households, and 370 families residing in the city. The population density
Population density
Population density is a measurement of population per unit area or unit volume. It is frequently applied to living organisms, and particularly to humans...
was 6,270.9 people per square mile (2,387.7/km²). There were 647 housing units at an average density of 2,624.4/sq mi (999.2/km²). The racial makeup of the city was 91.72% White, 1.03% African American, 4.14% Asian, 1.81% from other races
Race (United States Census)
Race and ethnicity in the United States Census, as defined by the Federal Office of Management and Budget and the United States Census Bureau, are self-identification data items in which residents choose the race or races with which they most closely identify, and indicate whether or not they are...
, and 1.29% from two or more races. Hispanic or Latino of any race were 6.47% of the population. 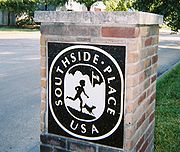 There were 618 households out of which 40.9% had children under the age of 18 living with them, 53.2% were married couples
Marriage
Marriage is a social union or legal contract between people that creates kinship. It is an institution in which interpersonal relationships, usually intimate and sexual, are acknowledged in a variety of ways, depending on the culture or subculture in which it is found...
living together, 5.5% had a female householder with no husband present, and 40.1% were non-families. 38.5% of all households were made up of individuals and 18.3% had someone living alone who was 65 years of age or older. The average household size was 2.50 and the average family size was 3.44.

The median income for a household in the city was $81,267, and the median income for a family was $163,303. Males had a median income of $100,000 versus $48,654 for females. The per capita income
Per capita income
Per capita income or income per person is a measure of mean income within an economic aggregate, such as a country or city. It is calculated by taking a measure of all sources of income in the aggregate and dividing it by the total population...
for the city was $57,021. About 3.3% of families and 5.3% of the population were below the poverty line, including 2.7% of those under age 18 and 12.7% of those age 65 or over.

Southside Place's city council meets on the second Tuesday of each month. The mayor and the city council are elected for two-year terms. Two and three vacancies are on the council on alternate years. Elections are held during the first Saturday in each May. Any qualified voter may be placed on the ballot for Mayor or a city council position. The Mayor and each council member receive a one U.S. dollar per year salary in accordance with a Texas state law which requires all city officials to receive a salary. As of 2011 the mayor is Glenn "Pat" Patterson. Richard Rothfelder preceded him. Randy Sim, Scott Luther, Ashley Bryan, Charles David Thompson, and Renato Pereira (Mayor Pro-Tem) are the city council members.

Southside Place is located in District 134 of the Texas House of Representatives
Texas House of Representatives
The Texas House of Representatives is the lower house of the Texas Legislature. The House is composed of 150 members elected from single-member districts across the state. The average district has about 150,000 people. Representatives are elected to two-year terms with no term limits...
. As of 2011 Sarah Davis represents the district. Southside Place is within District 17
Texas Senate, District 17
District 17 of the Texas Senate is a senatorial district that currently serves portions of Brazoria, Chambers, Fort Bend, Galveston, Harris and Jefferson counties in the U.S. state of Texas. Senator Kyle Janek announced his resignation on May 29, 2008. Governor Rick Perry called for a special...
of the Texas Senate
Texas Senate
The Texas Senate is the upper house of the Texas Legislature. There are 31 members of the Senate, representing 31 single-member districts across the state with populations of approximately 672,000 per constituency. There are no term limits, and each term is four years long. The Senate meets at the...
.

Shell Oil Company
Shell Oil Company
Shell Oil Company is the United States-based subsidiary of Royal Dutch Shell, a multinational oil company of Anglo Dutch origins, which is amongst the largest oil companies in the world. Approximately 22,000 Shell employees are based in the U.S. The head office in the U.S. is in Houston, Texas...
's Bellaire Technology Center is located in Southside Place. The 310000 square feet (28,799.9 m²) facility opened as a geophysical processing center in 1936. For decades many scientists discovered facts related to oil and natural gas. In 2008 Shell announced that it will close the Bellaire center and expand the Westhollow Technology Center in Houston to accommodate the most of the staff employed by the Bellaire center, while some staff would go to the Woodcreek Technology Campus in western Houston. Shell said that it closed the Bellaire facility partly because two thirds of the land was leased, and the lease was set to expire in 2010. The move will decrease tax revenue into the City of Southside Place. The city rezoned the parcel for various land uses. 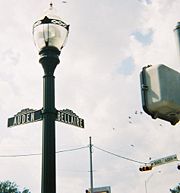 Gabriela Mistral Early Childhood Center is the closest early childhood center to the city of Southside Place. Since only poor students, homeless students, students who are not proficient in English, or children of active-duty members of the U.S. military or whose parent has been killed, injured, or missing in action while on active duty may be enrolled tuition-free in HISD preschools, most Southside Place residents rely on private preschools. Students who are eligible for HISD's preschools may attend any Early Childhood Center in Houston ISD.

The park and pool facilities are operated by the Southside Place Park Association, which is not affiliated with the City of Southside Place. The SPPA is governed by a seven member Board of Directors and managed by two paid employees.

The park/pool area is located between Auden and Edloe on the streets of Garnet and Farbar. Facilities include a park, tennis courts, baseball field, basketball court, swimming pool and clubhouse. Only the park, field and basketball court are open for public use. Use of the tennis court, pool and clubhouse require a park membership. Annual membership is $425 and is open to residents of Southside Place. Approx. 80% of Southside Place residents are also park members. The clubhouse is home to a summer camp that is run by Ed and Karin Davis. The park staff consists of 1 full-time park manager, 1 part-time clubhouse manager, 30+ camp staff members, 2 assistant pool managers, 2 swim lessons instructors and 35 Red Cross certified Life Guards. The pool is also home to a 150+ member swim team that competes with other pools in the Houston area. Swim team season runs from mid-May through the end of June.

The Houston Chronicle
Houston Chronicle
The Houston Chronicle is the largest daily newspaper in Texas, USA, headquartered in the Houston Chronicle Building in Downtown Houston. , it is the ninth-largest newspaper by circulation in the United States...
is the area regional newspaper. On Thursdays, residents receive the Bellaire
Bellaire, Texas
Bellaire is a city in southwest Harris County, Texas, United States, within the metropolitan area. As of the 2000 U.S. Census, the city population was 15,642 and is completely surrounded by the cities of Houston and West University Place....
/West U/River Oaks
River Oaks, Houston, Texas
River Oaks is an affluent community located in the geographic center of Houston, Texas, United States. Located within the 610 Loop and between Downtown and Uptown, the community spans . Established in the 1920s by brothers William and Michael Hogg, the community became a well-publicized national...
/Meyerland
Meyerland, Houston, Texas
Meyerland is a community in southwest Houston, Texas, outside of the 610 Loop and inside Beltway 8.A notable feature of Meyerland is Meyerland Plaza, a large outdoor shopping center. Meyerland also is the center of Houston's Jewish community...
http://www.chron.com/news/community/bellaire local section.

The West University Examiner is a local newspaper distributed in the community http://www.westuexaminer.com/about_us/.

The Village News is a local newspaper distributed in the community.