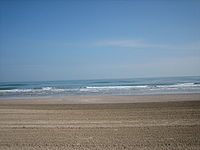 South Padre Island is a barrier island
Barrier island
Barrier islands, a coastal landform and a type of barrier system, are relatively narrow strips of sand that parallel the mainland coast. They usually occur in chains, consisting of anything from a few islands to more than a dozen...
in the U.S. state of Texas
Texas
Texas is the second largest U.S. state by both area and population, and the largest state by area in the contiguous United States.The name, based on the Caddo word "Tejas" meaning "friends" or "allies", was applied by the Spanish to the Caddo themselves and to the region of their settlement in...
. It is located in Cameron County
Cameron County, Texas
Cameron County is the southernmost county located in the U.S. state of Texas. In 2010, its population was 406,220. Its county seat is Brownsville. Cameron was founded in 1848...
and is a popular vacation destination because the resort city South Padre Island
South Padre Island, Texas
South Padre Island is a town in Cameron County, Texas, United States. It is part of the Brownsville–Harlingen Metropolitan Statistical Area. It may be included as part of the Brownsville–Harlingen–Raymondville and the Matamoros–Brownsville metropolitan areas. The population was 2,816 at the...
is located on the island. The island itself is considered to have been settled by Padre Jose Nicolas Balli, who had a cattle ranch set up there early 19th century. However, before that, Spaniards moved in and out of the area occasionally; their primary purpose was looking for gold naturally. And even before that, there were tribes of cannabilistic Native Americans that roamed the island. The conflicts between the Spaniards and Native Americans were few and for between, but when they happened the Spanish always won. After Padre Balli had set up his successful ranching business, he and his family were driven out by the Mexican-American War and weren't able to return after due to the Civil War. Most of the island was closed by the National Park Service up until 1962, and thats when many businesses began to spring forth and generate a real economy for the island and neighboring Port Isabel. By 1978 the Island had a population of around 314 and just a decade later it had a population of 1,012 and 111 businesses. Being mainly coastline, the Islands main source of income soon became tourism with tens of thousands of college students flocking to the Island every Spring Break and a fair number of Winter Texans.