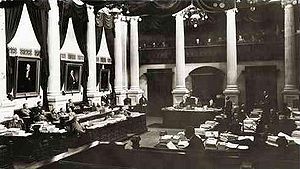 The House of Assembly was created in 1857, when South Australia attained self-government. The development of an elected legislature—although only men could vote—marked a significant change from the prior system, where power had been concentrated in the hands of the Governor and the Legislative Council, which was appointed by the Governor.

In 1894, the House of Assembly granted women the right to vote—the second place in the world to do so after New Zealand
New Zealand
New Zealand is an island country in the south-western Pacific Ocean comprising two main landmasses and numerous smaller islands. The country is situated some east of Australia across the Tasman Sea, and roughly south of the Pacific island nations of New Caledonia, Fiji, and Tonga...
in 1893, and the first to allow them to stand for election.

Most legislation is initiated in the House of Assembly. The party or coalition with the most seats in the lower house is invited by the Governor to form government. The leader of that party subsequently becomes Premier of South Australia, and their senior colleagues become ministers responsible for various portfolios. As Australian major party MPs almost always vote along party lines, almost all legislation introduced by the governing party will pass through the House of Assembly.

As with the federal parliament and Australian other states and territories, voting in the Assembly is compulsory for all those over the age of 18. Voting in the House of Assembly had originally been voluntary, but this was changed in 1942.