The South Atlantic Anomaly (SAA) is an area where the Earth's inner Van Allen radiation belt
Van Allen radiation belt
The Van Allen radiation belt is a torus of energetic charged particles around Earth, which is held in place by Earth's magnetic field. It is believed that most of the particles that form the belts come from solar wind, and other particles by cosmic rays. It is named after its discoverer, James...
comes closest to the Earth
Earth
Earth is the third planet from the Sun, and the densest and fifth-largest of the eight planets in the Solar System. It is also the largest of the Solar System's four terrestrial planets...
's surface. This leads to an increased flux
Flux
In the various subfields of physics, there exist two common usages of the term flux, both with rigorous mathematical frameworks.* In the study of transport phenomena , flux is defined as flow per unit area, where flow is the movement of some quantity per time...
of energetic particles in this region and exposes orbiting satellites to higher than usual levels of radiation. The effect is caused by the non-concentricity
Concentric
Concentric objects share the same center, axis or origin with one inside the other. Circles, tubes, cylindrical shafts, disks, and spheres may be concentric to one another...
of the Earth and its magnetic dipole
Dipole
In physics, there are several kinds of dipoles:*An electric dipole is a separation of positive and negative charges. The simplest example of this is a pair of electric charges of equal magnitude but opposite sign, separated by some distance. A permanent electric dipole is called an electret.*A...
, and the SAA is the near-Earth region where the Earth's magnetic field
Earth's magnetic field
Earth's magnetic field is the magnetic field that extends from the Earth's inner core to where it meets the solar wind, a stream of energetic particles emanating from the Sun...
is weakest. 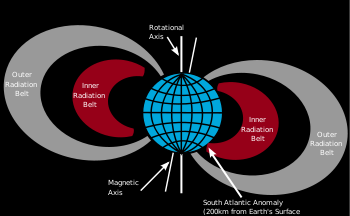 The shape of the SAA changes over time. Since its initial discovery in 1958, the southern limits of the SAA have remained roughly constant while a long-term expansion has been measured to the northwest, the north, the northeast, and the east. Additionally, the shape and particle density of the SAA varies on a diurnal
Day
A day is a unit of time, commonly defined as an interval equal to 24 hours. It also can mean that portion of the full day during which a location is illuminated by the light of the sun...
basis, with greatest particle density corresponding roughly to local noon. At an altitude of approximately 500 km (310.7 mi), the SAA spans from -50° to 0° geographic latitude and from -90° to +40° longitude. The highest intensity portion of the SAA drifts to the west at a speed of about 0.3 degrees per year, and is noticeable in the references listed below. The drift rate of the SAA is very close to the rotation differential between the Earth's core and its surface, estimated to be between 0.3 and 0.5 degrees per year.

Predictions estimate that by 2240 the SAA may cover approximately half of the southern hemisphere. The increased radiation on the population is estimated to be harmful.

The South Atlantic Anomaly is of great significance to astronomical satellite
Satellite
In the context of spaceflight, a satellite is an object which has been placed into orbit by human endeavour. Such objects are sometimes called artificial satellites to distinguish them from natural satellites such as the Moon....
s and other spacecraft
Spacecraft
A spacecraft or spaceship is a craft or machine designed for spaceflight. Spacecraft are used for a variety of purposes, including communications, earth observation, meteorology, navigation, planetary exploration and transportation of humans and cargo....
that orbit
Orbit
In physics, an orbit is the gravitationally curved path of an object around a point in space, for example the orbit of a planet around the center of a star system, such as the Solar System...
the Earth at several hundred kilometers altitude; these orbits take satellites through the anomaly periodically, exposing them to several minutes of strong radiation, caused by the trapped protons in the inner Van Allen belt. The International Space Station
International Space Station
The International Space Station is a habitable, artificial satellite in low Earth orbit. The ISS follows the Salyut, Almaz, Cosmos, Skylab, and Mir space stations, as the 11th space station launched, not including the Genesis I and II prototypes...
, orbiting with an inclination
Inclination
Inclination in general is the angle between a reference plane and another plane or axis of direction.-Orbits:The inclination is one of the six orbital parameters describing the shape and orientation of a celestial orbit...
of 51.6°, requires extra shielding to deal with this problem. The Hubble Space Telescope
Hubble Space Telescope
The Hubble Space Telescope is a space telescope that was carried into orbit by a Space Shuttle in 1990 and remains in operation. A 2.4 meter aperture telescope in low Earth orbit, Hubble's four main instruments observe in the near ultraviolet, visible, and near infrared...
does not take observations while passing through the SAA. Astronauts are also affected by this region which is said to be the cause of peculiar 'shooting stars' (phosphenes) seen in the visual field of astronauts. Passing through the South Atlantic Anomaly is thought to be the reason for the early failures of the Globalstar
Globalstar
Globalstar is a low Earth orbit satellite constellation for satellite phone and low-speed data communications, somewhat similar to the Iridium satellite constellation and Orbcomm satellite systems.-History:...
network's satellites.

The PAMELA experiment, while passing through the SAA, detected antiproton
Antiproton
The antiproton is the antiparticle of the proton. Antiprotons are stable, but they are typically short-lived since any collision with a proton will cause both particles to be annihilated in a burst of energy....
levels that were orders of magnitude higher than those expected from normal particle decay
Particle decay
Particle decay is the spontaneous process of one elementary particle transforming into other elementary particles. During this process, an elementary particle becomes a different particle with less mass and an intermediate particle such as W boson in muon decay. The intermediate particle then...
. This suggests the Van Allen belt confines antiparticles produced by the interaction of the Earth's upper atmosphere with cosmic rays.

NASA has reported that modern laptops have crashed when the space shuttle flights passed through the anomaly.