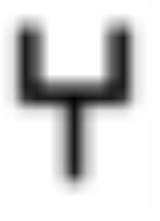 Its mature form was reached around 500 BC, and its use continued until the 7th century AD, including Old North Arabian inscriptions in variants of the alphabet, when it was displaced by the Arabic alphabet
Arabic alphabet
The Arabic alphabet or Arabic abjad is the Arabic script as it is codified for writing the Arabic language. It is written from right to left, in a cursive style, and includes 28 letters. Because letters usually stand for consonants, it is classified as an abjad.-Consonants:The Arabic alphabet has...
. In Ethiopia it evolved later into the Ge'ez alphabet
Ge'ez alphabet
Ge'ez , also called Ethiopic, is a script used as an abugida for several languages of Ethiopia and Eritrea but originated in an abjad used to write Ge'ez, now the liturgical language of the Ethiopian and Eritrean Orthodox Church...
, which, with added symbols throughout the centuries, has been used to write Amharic
Amharic language
Amharic is a Semitic language spoken in Ethiopia. It is the second most-spoken Semitic language in the world, after Arabic, and the official working language of the Federal Democratic Republic of Ethiopia. Thus, it has official status and is used nationwide. Amharic is also the official or working...
, Tigrinya
Tigrinya language
Tigrinya , also spelled Tigrigna, Tigrnia, Tigrina, Tigriña, less commonly Tigrinian, Tigrinyan, is a Semitic language spoken by the Tigrinya people in central Eritrea , where it is one of the two main languages of Eritrea, and in the Tigray Region of Ethiopia , where it...
and Tigre
Tigre language
For other uses please see Tigre Tigre is a Semitic language, which, along with Tigrinya, is believed to be one of direct descendants of the extinct Ge'ez language...
, as well as other languages (including various Semitic
Semitic languages
The Semitic languages are a group of related languages whose living representatives are spoken by more than 270 million people across much of the Middle East, North Africa and the Horn of Africa...
, Cushitic
Cushitic languages
The Cushitic languages are a branch of the Afroasiatic language family spoken in the Horn of Africa, Tanzania, Kenya, Sudan and Egypt. They are named after the Biblical character Cush, who was identified as an ancestor of the speakers of these specific languages as early as AD 947...
, and Nilo-Saharan languages
Nilo-Saharan languages
The Nilo-Saharan languages are a proposed family of African languages spoken by some 50 million people, mainly in the upper parts of the Chari and Nile rivers , including historic Nubia, north of where the two tributaries of Nile meet...
).

Zabur is the name of the cursive form of the South Arabian script that was used by the ancient Yemenis (Sabaeans
Sabaeans
The Sabaeans or Sabeans were an ancient people speaking an Old South Arabian language who lived in what is today Yemen, in the south west of the Arabian Peninsula.Some scholars suggest a link between the Sabaeans and the Biblical land of Sheba....
) in addition to their monumental script, or musnad
Musnad
Musnad may refer to:*South Arabian alphabet*Musnad hadith*Musnad Ahmad ibn Hanbal...
(see, e.g., Ryckmans, J., Müller, W. W., and ‛Abdallah, Yu., Textes du Yémen Antique inscrits sur bois. Louvain-la-Neuve
Louvain-la-Neuve
Louvain-la-Neuve is a planned city in the municipality of Ottignies-Louvain-la-Neuve, Belgium, situated 30 km southeast of Brussels, in the French-speaking part of the country...
, Belgium, 1994 (Publications de l'Institut Orientaliste de Louvain, 43)).

The cursive
Cursive
Cursive, also known as joined-up writing, joint writing, or running writing, is any style of handwriting in which the symbols of the language are written in a simplified and/or flowing manner, generally for the purpose of making writing easier or faster...
zabur script—also known as "South Arabian minuscules"—was used by the ancient Yemenis to inscribe everyday documents on wooden sticks in addition to the rock-cut monumental musnad letters displayed below. 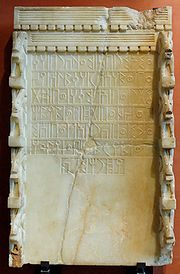 Old South Arabian was added to the Unicode
Unicode
Unicode is a computing industry standard for the consistent encoding, representation and handling of text expressed in most of the world's writing systems...
Standard in October, 2009 with the release of version 5.2.

Gallery of some inscriptions