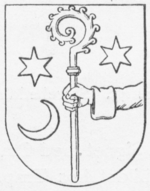 Sorø is a town
Town
A town is a human settlement larger than a village but smaller than a city. The size a settlement must be in order to be called a "town" varies considerably in different parts of the world, so that, for example, many American "small towns" seem to British people to be no more than villages, while...
in Sorø municipality
Sorø municipality
Sorø municipality is a municipality in Region Sjælland on the island of Zealand in east Denmark. The municipality covers an area of 317 km², and has a total population of 29,180...
in Region Sjælland
Region Sjælland
Region Zealand is an administrative region of Denmark established on January 1, 2007 as part of the 2007 Danish Municipal Reform, which replaced the traditional counties with five larger regions. At the same time, smaller municipalities were merged into larger units, cutting the number of...
on the island of Zealand (Sjælland) in east Denmark
Denmark
Denmark is a Scandinavian country in Northern Europe. The countries of Denmark and Greenland, as well as the Faroe Islands, constitute the Kingdom of Denmark . It is the southernmost of the Nordic countries, southwest of Sweden and south of Norway, and bordered to the south by Germany. Denmark...
. The population is 7,805 (1 January 2011). The municipal council and the regional council are located in Sorø.

Sorø was founded in 1161 by Bishop
Bishop
A bishop is an ordained or consecrated member of the Christian clergy who is generally entrusted with a position of authority and oversight. Within the Catholic Church, Eastern Orthodox, Oriental Orthodox Churches, in the Assyrian Church of the East, in the Independent Catholic Churches, and in the...
Absalon
Absalon
Absalon was a Danish archbishop and statesman, who was the Bishop of Roskilde from 1158 to 1192 and Archbishop of Lund from 1178 until his death. He was the foremost politician and churchfather of Denmark in the second half of the 12th century, and was the closest advisor of King Valdemar I of...
, later the founder of Copenhagen
Copenhagen
Copenhagen is the capital and largest city of Denmark, with an urban population of 1,199,224 and a metropolitan population of 1,930,260 . With the completion of the transnational Øresund Bridge in 2000, Copenhagen has become the centre of the increasingly integrating Øresund Region...
, and is the site of Sorø Academy
Sorø Academy
Sorø Academy is a boarding school and public gymnasium located in the small town of Sorø, Denmark. It traces its history back to the 12th century when Bishop Absalon founded a monastery at the site, which was confiscated by the Crown after the Reformation, and ever since, on and off, it has served...
(Danish
Danish language
Danish is a North Germanic language spoken by around six million people, principally in the country of Denmark. It is also spoken by 50,000 Germans of Danish ethnicity in the northern parts of Schleswig-Holstein, Germany, where it holds the status of minority language...
Sorø Akademi). The Academy is an educational institution built in 1140. Also built that year was Sorø Klosterkirke
Sorø Klosterkirke
Sorø Klosterkirke is located in the Danish town of Sorø. It was founded by Danish archbishop Absalon and built by Cistercians in the period from 1161-1201. It is made of red brick, which was a new material for the time. It is built similar style to the Abbey of Fontenay. The church contains royal...
, the church where Bishop Absalon and Margaret I of Denmark
Margaret I of Denmark
Margaret I was Queen of Denmark, Norway and Sweden and founder of the Kalmar Union, which united the Scandinavian countries for over a century. Although she acted as queen regnant, the laws of contemporary Danish succession denied her formal queenship. Her title in Denmark was derived from her...
were buried (she was later moved to Roskilde Domkirke, Roskilde
Roskilde
Roskilde is the main city in Roskilde Municipality, Denmark on the island of Zealand. It is an ancient city, dating from the Viking Age and is a member of the Most Ancient European Towns Network....
).

Many people live in Sorø, but work either in the greater Copenhagen metropolitan area or in the town of Roskilde.