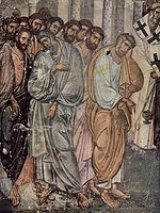 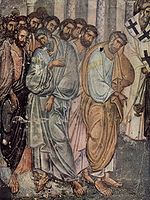 The Sopoćani monastery an endowment of King Stefan Uroš I of Serbia
Serbia
Serbia , officially the Republic of Serbia , is a landlocked country located at the crossroads of Central and Southeast Europe, covering the southern part of the Carpathian basin and the central part of the Balkans...
, was built in the second half of the 13th century, near the source of the Raška River
Raška River
The Raška is a river in southwestern Serbia, a 60 km-long left tributary to the Ibar river.Its historical name is Arzon ....
in the region of Ras
Ras city
Stari Ras , known at the time as Ras, was one of the first capitals of the medieval Serbian state of Raška, and the most important one for a long period of time. Located in today's region of Raška or Sandžak of Serbia, the city was right in the centre of the early medieval state that started to...
, the centre of the Serbian medieval state
History of Medieval Serbia
Тhe medieval history of Serbia begins in the 5th century AD with the Slavic invasion of the Balkans, and lasts until the Ottoman occupation of 1540.- Slavic invasion :...
. It is World Heritage Site
World Heritage Site
A UNESCO World Heritage Site is a place that is listed by the UNESCO as of special cultural or physical significance...
, added in 1979 with Stari Ras. The church was dedicated to the Holy Trinity and completed around 1265, with interior decorated shortly thereafter. Archbishop Sava II, who became the head of the Serbian Orthodox Church
Serbian Orthodox Church
The Serbian Orthodox Church is one of the autocephalous Orthodox Christian churches, ranking sixth in order of seniority after Constantinople, Alexandria, Antioch, Jerusalem, and Russia...
in 1263, is represented in the procession of archbishops in the area of the altar
Altar
An altar is any structure upon which offerings such as sacrifices are made for religious purposes. Altars are usually found at shrines, and they can be located in temples, churches and other places of worship...
. The fresco
Fresco
Fresco is any of several related mural painting types, executed on plaster on walls or ceilings. The word fresco comes from the Greek word affresca which derives from the Latin word for "fresh". Frescoes first developed in the ancient world and continued to be popular through the Renaissance...
es of Sopoćani are considered by some experts on Serbian medieval art as the most beautiful of that period. On the western wall of the nave
Nave
In Romanesque and Gothic Christian abbey, cathedral basilica and church architecture, the nave is the central approach to the high altar, the main body of the church. "Nave" was probably suggested by the keel shape of its vaulting...
is a famous fresco of the Dormition of the Virgin.
In the 16th century the monks had to temporarily leave the monastery on several occasions due to the Ottoman
Ottoman Empire
The Ottoman EmpireIt was usually referred to as the "Ottoman Empire", the "Turkish Empire", the "Ottoman Caliphate" or more commonly "Turkey" by its contemporaries...
threat. Finally, during one of the raids in 1689 the Ottoman Turks
Ottoman Turks
The Ottoman Turks were the Turkish-speaking population of the Ottoman Empire who formed the base of the state's military and ruling classes. Reliable information about the early history of Ottoman Turks is scarce, but they take their Turkish name, Osmanlı , from the house of Osman I The Ottoman...
set fire to the monastery and carried off the lead from the church roof. The brotherhood escaped with some important relics to Kosovo
Kosovo
Kosovo is a region in southeastern Europe. Part of the Ottoman Empire for more than five centuries, later the Autonomous Province of Kosovo and Metohija within Serbia...
- but did not return to Sopoćani; it remained deserted for over two hundred years, until the 20th century. The church slowly decayed: its vaults caved in, its dome fell down, and the remains of the surrounding buildings were covered with rubble and earth.

Finally, during the 20th century the monastery was restored and today it is settled by a thriving brotherhood of dedicated monks. The fact that most of the Sopoćani frescoes still shine with radiant beauty - surviving more than two centuries of extreme exposure to the elements - many consider nothing less than a divine miracle.