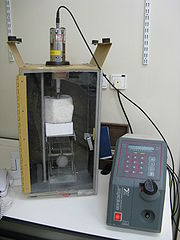 Sonication is the act of applying sound (usually ultrasound
Ultrasound
Ultrasound is cyclic sound pressure with a frequency greater than the upper limit of human hearing. Ultrasound is thus not separated from "normal" sound based on differences in physical properties, only the fact that humans cannot hear it. Although this limit varies from person to person, it is...
) energy to agitate particles in a sample, for various purposes. In the laboratory, it is usually applied using an ultrasonic bath or an ultrasonic probe, colloquially known as a sonicator. In a paper machine
Fourdrinier machine
This article contains a glossary section at the end.Most modern papermaking machines are based on the principles of the Fourdrinier Machine. It has been used in some variation since its inception...
, an ultrasonic foil
Ultrasonic foil (papermaking)
High power ultrasonics are used in the ultrasonic foils under the formation wire in a paper machine to produce paper of higher quality. On the top side of the formation wire over an ultrasonic foil, in the stock , millions of pressure pulses from imploding cavitation bubbles will keep the fibres...
can distribute cellulose fibres more uniformly and strengthen the paper.

Sonication can be used to speed dissolution, by breaking intermolecular interactions. It is especially useful when it is not possible to stir the sample, as with NMR tube
NMR tube
An NMR tube is a thin glass walled tube used to contain samples in nuclear magnetic resonance spectroscopy. Typically NMR tubes come in 5 mm diameters but 10 mm and 3 mm samples are known. It is important that the tubes are uniformly thick and well-balanced to ensure that NMR tube...
s. It may also be used to provide the energy for certain chemical reactions to proceed. Sonication can be used to remove dissolved gases from liquids (degassing) by sonicating the liquid while it is under a vacuum. This is an alternative to the freeze-pump-thaw and sparging
Sparging
Sparging may refer to:*A step in lautering, a process used in brewing beer*Sparging, a process in the processing of edible oils*Sparging , a process used in chemistry whereby a chemically inert gas is bubbled through a liquid...
methods.

In biological applications, sonication may be sufficient to disrupt or deactivate a biological material. For example, sonication is often used to disrupt cell membranes
Cell disruption
Cell disruption is a method or process for releasing biological molecules from inside a cell.- Choice of disruption method:The production of biologically-interesting molecules using cloning and culturing methods allows the study and manufacture of relevant molecules.Except for excreted molecules,...
and release cellular contents. This process is called sonoporation
Sonoporation
Sonoporation, or cellular sonication, is the use of sound for modifying the permeability of the cell plasma membrane. This technique is usually used in molecular biology and non-viral gene therapy in order to allow uptake of large molecules such as DNA into the cell, in a cell disruption process...
. Sonication is also use to fragment molecules of DNA, in which the DNA subjected to brief periods of sonication is sheared into smaller fragments.

Sonication is commonly used in nanotechnology for evenly dispersing nanoparticles in liquids.

Sonication is also used to extract microfossils from rock.

Sonication can also refer to buzz pollination
Buzz pollination
Sonication or buzz pollination is a technique used by some bees to release pollen which is more or less firmly held by the anthers, which makes pollination more efficient. The anther of buzz-pollinated species of plants is typically tubular, with an opening at only one end, and the pollen is inside...
– the process that bees use to shake pollen
Pollen
Pollen is a fine to coarse powder containing the microgametophytes of seed plants, which produce the male gametes . Pollen grains have a hard coat that protects the sperm cells during the process of their movement from the stamens to the pistil of flowering plants or from the male cone to the...
from flower
Flower
A flower, sometimes known as a bloom or blossom, is the reproductive structure found in flowering plants . The biological function of a flower is to effect reproduction, usually by providing a mechanism for the union of sperm with eggs...
s by vibrating their wing muscles.
The source of this article is wikipedia, the free encyclopedia.  The text of this article is licensed under the GFDL.