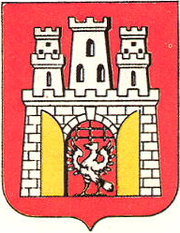 Sokal ' onMouseout='HidePop("92524")' href="/topics/Romanization_of_Ukrainian">translit.
Romanization of Ukrainian
The romanization or Latinization of Ukrainian is the representation of the Ukrainian language using Latin letters. Ukrainian is natively written in its own Ukrainian alphabet, a variation of Cyrillic....
Sokal’) is a town
Town
A town is a human settlement larger than a village but smaller than a city. The size a settlement must be in order to be called a "town" varies considerably in different parts of the world, so that, for example, many American "small towns" seem to British people to be no more than villages, while...
located on the banks of the Bug River
Bug River
The Bug River is a left tributary of the Narew river flows from central Ukraine to the west, passing along the Ukraine-Polish and Polish-Belarusian border and into Poland, where it empties into the Narew river near Serock. The part between the lake and the Vistula River is sometimes referred to as...
in the Lviv Oblast
Lviv Oblast
Lviv Oblast is an oblast in western Ukraine. The administrative center of the oblast is the city of Lviv.-History:The oblast was created as part of the Ukrainian Soviet Socialist Republic on December 4, 1939...
of western Ukraine
Ukraine
Ukraine is a country in Eastern Europe. It has an area of 603,628 km², making it the second largest contiguous country on the European continent, after Russia...
. Serving as the administrative center of the Sokal Raion
Sokal Raion
Sokal Raion is a raion in Lviv Oblast in western Ukraine. Its administrative center is Sokal. It has a population of 94 500.It was established in 1939.-External links:*...
(district), the city itself also ranks as a separate raion
Raion
A raion is a type of administrative unit of several post-Soviet countries. The term, which is from French rayon 'honeycomb, department,' describes both a type of a subnational entity and a division of a city, and is commonly translated in English as "district"...
within the oblast
Oblast
Oblast is a type of administrative division in Slavic countries, including some countries of the former Soviet Union. The word "oblast" is a loanword in English, but it is nevertheless often translated as "area", "zone", "province", or "region"...
.