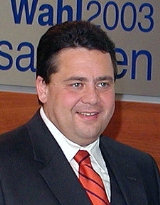 On 15 December 1999, after the resignation of Gerhard Glogowski
Gerhard Glogowski
Gerhard Glogowski is a German politician .-Education:After Glogowski finished public school in Bonn he completed an apprenticeship as Toolmaker. In parallel, he attended night school where he finished his Abitur...
, who had succeeded Gerhard Schröder
Gerhard Schröder
Gerhard Fritz Kurt Schröder is a German politician, and was Chancellor of Germany from 1998 to 2005. A member of the Social Democratic Party of Germany , he led a coalition government of the SPD and the Greens. Before becoming a full-time politician, he was a lawyer, and before becoming Chancellor...
in office, Gabriel became Minister-President of Lower Saxony and served until 4 March 2003. After being voted out of office, he became the SPD's "Representative for Pop Culture and Pop Discourse" from 2003 to 2005, for which he was bestowed the nickname Siggi Pop. From 2005 to 2009 he was the Federal Minister for the Environment, Nature Conservation and Nuclear Safety
Federal Ministry for Environment, Nature Conservation and Nuclear Safety (Germany)
The German Federal Ministry for the Environment, Nature Conservation and Nuclear Safety, known by the initials BMU from the German name, Bundesministerium für Umwelt, Naturschutz und Reaktorsicherheit, is a ministry of the German federal government. Its headquarters are in Bonn, with a branch in...
in the first cabinet of Angela Merkel
Angela Merkel
Angela Dorothea Merkel is the current Chancellor of Germany . Merkel, elected to the Bundestag from Mecklenburg-Vorpommern, has been the chairwoman of the Christian Democratic Union since 2000, and chairwoman of the CDU-CSU parliamentary coalition from 2002 to 2005.From 2005 to 2009 she led a...
(CDU).