Encyclopedia
SoBe is a brand of tea
Tea
Tea is an aromatic beverage prepared by adding cured leaves of the Camellia sinensis plant to hot water. The term also refers to the plant itself. After water, tea is the most widely consumed beverage in the world...
s, fruit-juice blends (smoothie) and enhanced water beverages owned by PepsiCo
PepsiCo
PepsiCo Inc. is an American multinational corporation headquartered in Purchase, New York, United States, with interests in the manufacturing, marketing and distribution of grain-based snack foods, beverages, and other products. PepsiCo was formed in 1965 with the merger of the Pepsi-Cola Company...
. The name SoBe is an abbreviation of South Beach
South Beach
South Beach, also nicknamed SoBe, is a neighborhood in the city of Miami Beach, Florida, United States. It is the area south of Indian Creek and encompasses roughly the southernmost 23 blocks of the main barrier island that separates the Atlantic Ocean and Biscayne Bay.This area was the first...
, named after the upscale area located in Miami Beach, Florida
Miami Beach, Florida
Miami Beach is a coastal resort city in Miami-Dade County, Florida, United States, incorporated on March 26, 1915. The municipality is located on a barrier island between the Atlantic Ocean and Biscayne Bay, the latter which separates the Beach from Miami city proper...
. In the past, the SoBe name has also been licensed for gum
Chewing gum
Chewing gum is a type of gum traditionally made of chicle, a natural latex product, or synthetic rubber known as polyisobutylene. For economical and quality reasons, many modern chewing gums use rubber instead of chicle...
and chocolate
Chocolate
Chocolate is a raw or processed food produced from the seed of the tropical Theobroma cacao tree. Cacao has been cultivated for at least three millennia in Mexico, Central and South America. Its earliest documented use is around 1100 BC...
products. SoBe has recently switched from glass bottles to plastic bottles for all of its beverages.

SoBe began as the South Beach Beverage Company, a drink manufacturer based in Norwalk, Connecticut
Norwalk, Connecticut
Norwalk is a city in Fairfield County, Connecticut, United States. According to the 2010 U.S. Census, the population of the city is 85,603, making Norwalk sixth in population in Connecticut, and third in Fairfield County...
from 1996-2001. Their first product was SoBe Black Tea 3G which contained ginseng
Ginseng
Ginseng is any one of eleven species of slow-growing perennial plants with fleshy roots, belonging to the genus Panax of the family Araliaceae....
, guarana
Guarana
Guarana , Paullinia cupana, syn. P. crysan, P. sorbilis) is a climbing plant in the maple family, Sapindaceae, native to the Amazon basin and especially common in Brazil. Guarana features large leaves and clusters of flowers, and is best known for its fruit, which is about the size of a coffee bean...
, and ginkgo. It proved popular and led to the introduction of other flavors. The company was bought by PepsiCo
PepsiCo
PepsiCo Inc. is an American multinational corporation headquartered in Purchase, New York, United States, with interests in the manufacturing, marketing and distribution of grain-based snack foods, beverages, and other products. PepsiCo was formed in 1965 with the merger of the Pepsi-Cola Company...
in October 2000.
It was co-founded by John Bello
John Bello
John Joseph Bello is an American entrepreneur best known for creating and building the SoBe brand of New Age beverages.-Early Life:...
and Tom Schwalm in 1995. 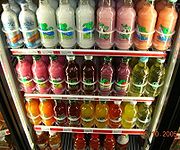