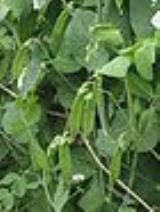 Encyclopedia
The snow pea is a legume, more specifically a variety of pea
Pea
A pea is most commonly the small spherical seed or the seed-pod of the pod fruit Pisum sativum. Each pod contains several peas. Peapods are botanically a fruit, since they contain seeds developed from the ovary of a flower. However, peas are considered to be a vegetable in cooking...
eaten whole in its pod while still unripe. The name mangetout (French
French language
French is a Romance language spoken as a first language in France, the Romandy region in Switzerland, Wallonia and Brussels in Belgium, Monaco, the regions of Quebec and Acadia in Canada, and by various communities elsewhere. Second-language speakers of French are distributed throughout many parts...
for "eat all") can apply both to snow peas and to snap pea
Snap pea
Snap peas , also known as sugarsnap peas, are a cultivar group of edible-podded peas that differ from snow peas in that their pods are round as opposed to flat. The name mangetout can apply both to snap peas and snow peas.Snap peas, like all other peas, are pod fruits...
s.

It is one of the earliest-known cultivated plants, with evidence of having been cultivated in a region that is now along the Thailand
Thailand
Thailand , officially the Kingdom of Thailand , formerly known as Siam , is a country located at the centre of the Indochina peninsula and Southeast Asia. It is bordered to the north by Burma and Laos, to the east by Laos and Cambodia, to the south by the Gulf of Thailand and Malaysia, and to the...
-Burma border, 12,000 years ago.

It is speculated that the name comes from the whitish tint reflected from the pods.
It also may come because of their tendency to grow at the end of winter, just before the last spring freeze. They can be covered with snow - hence the name - during these times, but still keep growing well.

As with all legumes, snow peas host beneficial bacteria, rhizobia
Rhizobia
Rhizobia are soil bacteria that fix nitrogen after becoming established inside root nodules of legumes . Rhizobia require a plant host; they cannot independently fix nitrogen...
, in their root nodules, which fix nitrogen in the soil — this is called a mutualistic relationship — and are therefore a useful companion plant, especially useful to grow intercropped with green, leafy vegetables that benefit from high nitrogen content in their soil.

The green shoots can also be cut and served as a vegetable as is done in Chinese cooking, especially stir-fried with garlic or shellfish such as crab.
The source of this article is wikipedia, the free encyclopedia.  The text of this article is licensed under the GFDL.