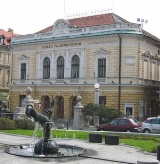 Encyclopedia
The Slovenian Philharmonic Orchestra is the national philharmonic orchestra
Orchestra
An orchestra is a sizable instrumental ensemble that contains sections of string, brass, woodwind, and percussion instruments. The term orchestra derives from the Greek ορχήστρα, the name for the area in front of an ancient Greek stage reserved for the Greek chorus...
of Slovenia
Slovenia
Slovenia , officially the Republic of Slovenia , is a country in Central and Southeastern Europe touching the Alps and bordering the Mediterranean. Slovenia borders Italy to the west, Croatia to the south and east, Hungary to the northeast, and Austria to the north, and also has a small portion of...
, based in the capital Ljubljana
Ljubljana
Ljubljana is the capital of Slovenia and its largest city. It is the centre of the City Municipality of Ljubljana. It is located in the centre of the country in the Ljubljana Basin, and is a mid-sized city of some 270,000 inhabitants...
.

On the Philharmonic Hall, a pastel yellow building on Kongresni trg., is a plaque stating that the Philharmonic was founded in 1701; though this refers to the founding of the Academia Philharmonicorum (1701) which produced baroque oratorios and other works, then became the Philharmonic Society in 1794. It was not until October 23 1908 that it was officially merged with the Glasbena matica (The Music Society).

It declined in the inter-war years and it wasn't until after World War II
World War II
World War II, or the Second World War , was a global conflict lasting from 1939 to 1945, involving most of the world's nations—including all of the great powers—eventually forming two opposing military alliances: the Allies and the Axis...
, after much concerted effort, that it was re-established, opening its concert on January 13, 1948, attended by composer Marjan Kozina
Marjan Kozina
Marjan Kozina was a Slovenian composer. His best known works include a symphony, composed in stages through the late 1940s; the opera Equinox, completed in 1946; and the music for the film On Own Land, which he later arranged into a suite for orchestra. He was a native of Novo Mesto.-References:...
, who became the first administrator of the Slovenian Philharmonic Orchestra.