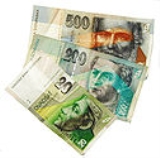 The obverse of the coins feature the Coat of Arms of Slovakia
Coat of arms of Slovakia
The coat of arms of Slovakia consists of a red shield, in early gothic style, charged with a silver double cross standing on the middle peak of a dark blue mountain consisting of three peaks. Extremities of the cross are amplificated, and its ends are concaved...
, with motifs from Slovak history
History of Slovakia
This article discusses the history of the territory of Slovakia.- Palaeolithic :Radiocarbon dating puts the oldest surviving archaeological artifacts from Slovakia - found near Nové Mesto nad Váhom - at 270,000 BCE, in the Early Paleolithic era...
on the reverses.

In 1993, banknotes were issued in denominations of 20, 50, 100, 500 and 1000 korún. These were produced by affixing stamps bearing the arms of Slovakia and the denomination to Czechoslovak banknotes.

Later in 1993, regular type banknotes were introduced in the same denominations, with 5000 korún notes added in 1994 and 200 korún added in 1995. The main motifs on the obverses of the banknotes represent important people living in the territory of the present Slovakia in various historical eras. On the reverses, these motifs are completed by depicting places where these people lived and were active.


Banknotes can be exchanged for euros indefinitely.