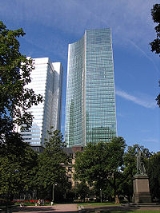 Encyclopedia
Skyper, a skyscraper
Skyscraper
A skyscraper is a tall, continuously habitable building of many stories, often designed for office and commercial use. There is no official definition or height above which a building may be classified as a skyscraper...
in Frankfurt
Frankfurt
Frankfurt am Main , commonly known simply as Frankfurt, is the largest city in the German state of Hesse and the fifth-largest city in Germany, with a 2010 population of 688,249. The urban area had an estimated population of 2,300,000 in 2010...
am Main’s banking district, is one of three buildings that together form the Skyper ensemble. With 39 floors and an overall height of 154 metres, it is the 12th largest building in Germany
Germany
Germany , officially the Federal Republic of Germany , is a federal parliamentary republic in Europe. The country consists of 16 states while the capital and largest city is Berlin. Germany covers an area of 357,021 km2 and has a largely temperate seasonal climate...
. Its quadrant-shaped silhouette is a distinctive part of the Frankfurt cityscape.

Completed in 2004, the tower is linked by a nine metre high glass atrium to a neo-classical villa dating from 1915. The villa is listed as a building of historical importance and once belonged, along with the site as a whole, to the Philipp Holzmann construction group, which used the property as its corporate head office. A residential and commercial building with 52 one- to three-room apartments and ground-floor retail space completes the ensemble.

The plans for the EUR 480 million project originated from Frankfurt architects JSK, who were commissioned by Holzmann AG. With building approval granted, the architects subsequently realised their plans on behalf of general contractors ABG and the new owner, DekaBank
DekaBank
The DekaBank is the central asset manager of the German Sparkassen. Deka as an investment company was founded in 1956. In 1999 it merged with Deutsche Girozentrale , which was founded in 1918...
, which had purchased the building for an open real estate fund of its real estate subsidiary, Deka Immobilien. Following completion in 2005, DekaBank moved into offices on the lower floors as the main tenant.

Skyper has been owned since 2006 by an investment company belonging to the Swiss banking group UBS.