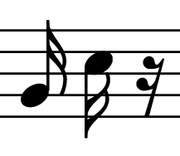 In music
Music
Music is an art form whose medium is sound and silence. Its common elements are pitch , rhythm , dynamics, and the sonic qualities of timbre and texture...
, a sixteenth note (American) or semiquaver (also occasionally demiquaver) is a note
Note
In music, the term note has two primary meanings:#A sign used in musical notation to represent the relative duration and pitch of a sound;#A pitched sound itself....
played for one sixteenth the duration of a whole note
Whole note
thumb|right|250px|Figure 1. A whole note and a whole rest.In music, a whole note or semibreve is a note represented by a hollow oval note head, like a half note , and no note stem . Its length is equal to four beats in 4/4 time...
, hence the name. The semiquaver is half of a quaver which is an eighth note.

In Unicode
Unicode
Unicode is a computing industry standard for the consistent encoding, representation and handling of text expressed in most of the world's writing systems...
, U+266C (♬) is a pair of beamed semiquavers.

The name of this note (and rest) in European languages varies greatly: