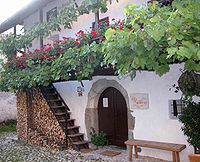 Simon Gregorčič was a Slovene poet
Poet
A poet is a person who writes poetry. A poet's work can be literal, meaning that his work is derived from a specific event, or metaphorical, meaning that his work can take on many meanings and forms. Poets have existed since antiquity, in nearly all languages, and have produced works that vary...
and Roman Catholic priest
Priest
A priest is a person authorized to perform the sacred rites of a religion, especially as a mediatory agent between humans and deities. They also have the authority or power to administer religious rites; in particular, rites of sacrifice to, and propitiation of, a deity or deities...
.

Gregorčič was born in the small mountain village of Vrsno
Vrsno, Kobarid
Vrsno is a small village in the Kobarid municipality in the Littoral region of Slovenia.It is best known as the birthplace of the poet Simon Gregorčič. Since 1966, Gregorčič's home has housed a small ethnographical museum, with some exhibits from the poet's life.-External links:*...
above the river Soča
Soca
The Soča or Isonzo is a 140 km long river that flows through western Slovenia and northeastern Italy. An Alpine river in character, its source lies in the Trenta Valley in the Julian Alps in Slovenia, at an elevation of around 1,100 metres...
in the County of Gorizia and Gradisca. In 1851, he attended primary school in Libušnje
Libušnje
Libušnje is a small village in the Kobarid municipality in the Littoral region of Slovenia.The local church, dedicated to The Holy Ghost, was originally built in 1753, and rebuilt in the second half of the 19th century. Its ceiling is painted by Ivan Grohar....
, but was in 1855 sent to school in Gorizia
Gorizia
Gorizia is a town and comune in northeastern Italy, in the autonomous region of Friuli Venezia Giulia. It is located at the foot of the Julian Alps, bordering Slovenia. It is the capital of the Province of Gorizia, and it is a local center of tourism, industry, and commerce. Since 1947, a twin...
. After finishing high school he entered the seminary
Seminary
A seminary, theological college, or divinity school is an institution of secondary or post-secondary education for educating students in theology, generally to prepare them for ordination as clergy or for other ministry...
in Gorizia. He was ordained on 27 October 1867 and became a vicar
Vicar
In the broadest sense, a vicar is a representative, deputy or substitute; anyone acting "in the person of" or agent for a superior . In this sense, the title is comparable to lieutenant...
in Kobarid
Kobarid
Kobarid is a town and a municipality in the upper Soča valley, western Slovenia, near the Italian border.Kobarid is known for the famous Battle of Caporetto, where the Italian retreat was documented by Ernest Hemingway in his novel A Farewell to Arms. The battle is well documented in the museum in...
in 1868. There he continued with his literary work and together with his friend Ignacij Gruntar in 1871 founded a public reading room, one of the first in the Slovene Lands
Slovene Lands
Slovene Lands or Slovenian Lands is the historical denomination for the whole of the Slovene-inhabited territories in Central Europe. It more or less corresponds to modern Slovenia and the adjacent territories in Italy, Austria and Hungary in which autochthonous Slovene minorities live.-...
.

In 1873 he was transferred to Rihemberk
Branik
Branik is a village in western Slovenia in the municipality of Nova Gorica.Branik is situated in the Branik Valley, which is part of the Vipava Valley, just beneath the Kras plateau. The location provides a favourable climate for the growth of Mediterranean ortages, such as figs and peaches...
in the Vipava Valley
Vipava Valley
The Vipava Valley is a valley located in the Slovenian Littoral, between the towns of Nova Gorica and Vipava.-Geography:It is a narrow valley, serving as the main passage between Friulian lowland and central Slovenia, and thus also an important corridor connecting Northern Italy to Central Europe...
. After that he was transferred a few more times before retiring in 1903, selling his house and moving into a flat in Gorizia, where he died on 24 November 1906.

As a student he began writing lyrical poetry which was published in many literary magazines (Slovenski glasnik
Slovenski glasnik
Slovenski glasnik was a Slovene-language magazine published monthly from 1858 till 1869. It was edited by Anton Janežič and published in Klagenfurt, then in the Duchy of Carinthia...
, Zgodnja Danica, Zvon, Ljubljanski zvon
Ljubljanski zvon
Ljubljanski zvon was a journal published in Ljubljana in Slovene between 1881 and 1941. It was considered one of the most prestigious literary and cultural magazines in Slovenia.- Early period :...
). It is apparent from his work that he was inspired by Romantic poetic forms. Mostly he was writing love, patriotic, life narrative poems and even some epic poems.

His poems, such as the ode
Ode
Ode is a type of lyrical verse. A classic ode is structured in three major parts: the strophe, the antistrophe, and the epode. Different forms such as the homostrophic ode and the irregular ode also exist...
Soči
Soci
Soci may refer to several villages in Romania:* Soci, a village in Pânceşti commune, Bacău County* Soci, a village in Mirosloveşti commune, Iaşi County* Soci, a village in Borca commune, Neamţ County* Soci, a village in Ştefan cel Mare commune, Neamţ County...
([To the] Soča
Soca
The Soča or Isonzo is a 140 km long river that flows through western Slovenia and northeastern Italy. An Alpine river in character, its source lies in the Trenta Valley in the Julian Alps in Slovenia, at an elevation of around 1,100 metres...
), were patriotic in nature, but he also wrote love poems, such as Kropiti te ne smem ("I am not allowed to bless you"), and worked in other poetic genres. His most important works were Človeka nikar, Ujetega ptiča tožba ("The Snared Bird's Lament"), Moj črni plašč, Veseli pastir, Nazaj v planinski raj, Oljki.