Encyclopedia
Simon's Town sometimes spelled Simonstown; is a town in South Africa
South Africa
The Republic of South Africa is a country in southern Africa. Located at the southern tip of Africa, it is divided into nine provinces, with of coastline on the Atlantic and Indian oceans...
, near Cape Town
Cape Town
Cape Town is the second-most populous city in South Africa, and the provincial capital and primate city of the Western Cape. As the seat of the National Parliament, it is also the legislative capital of the country. It forms part of the City of Cape Town metropolitan municipality...
which is home to the South African Navy
South African Navy
The South African Navy is the navy of the Republic of South Africa.-Formation:The South African Navy can trace its official origins back to the SA Naval Service, which was established on 1 April 1922....
. It is located on the shores of False Bay
False Bay
False Bay is a body of water defined by Cape Hangklip and the Cape Peninsula in the extreme South-West of South Africa.- Description and location :...
, on the eastern side of the Cape Peninsula
Cape Peninsula
The Cape Peninsula is a generally rocky peninsula that juts out for 75 km into the Atlantic Ocean at the south-western extremity of the African continent. At the southern end of the peninsula are Cape Point and the Cape of Good Hope...
. For more than two centuries it has been an important naval base and harbour (first for the Royal Navy and now the South African Navy). The town is named after Simon van der Stel
Simon van der Stel
Simon van der Stel was the last Commander and first Governor of the Cape Colony, the Dutch settlement at the Cape of Good Hope in South Africa.-Background:...
, an early governor of the Cape Colony
Cape Colony
The Cape Colony, part of modern South Africa, was established by the Dutch East India Company in 1652, with the founding of Cape Town. It was subsequently occupied by the British in 1795 when the Netherlands were occupied by revolutionary France, so that the French revolutionaries could not take...
.

The land rises steeply from near the water's edge and the picturesque village is boxed in along the shoreline by the heights above. The small harbour itself is not a particularly good natural harbour and is protected from swells by a breakwater that was built with thousands of huge blocks of sandstone quarried out of the face of the mountain above. Simon's Town is now in effect a suburb of greater Cape Town. The Simon's Town railway station is the terminus of the Southern Line, a railway line that runs south from the central business district of Cape Town. In places the railway line hugs the steep eastern shore of False Bay quite spectacularly and in bad weather foam from some heavy swells will fly up and wet the trains.

Boulders Beach
Boulders Beach
Boulders Beach is a sheltered beach made up of inlets between granite boulders, from which the name originated. It is located in the Cape Peninsula, near Simon's Town towards Cape Point, near Cape Town in the Western Cape province of South Africa. It is also commonly known as Boulders Bay.It is a...
is located a few kilometres to the south of Simon's Town, in the direction of Miller's Point
Miller's Point, Western Cape
Miller's Point is a headland and stretch of protected coastline in South Africa. It is located about south of Simon's Town on the road to Cape Point.-History:...
. Here small coves with white sandy beaches and calm shallow water are interspersed between boulders of Cape granite. There has been a colony of African penguin
African Penguin
The African Penguin , also known as the Black-footed Penguin is a species of penguin, confined to southern African waters. It is known as Brilpikkewyn in Afrikaans, Inguza or Unombombiya in Xhosa, Manchot Du Cap in French and Pingüino Del Cabo in Spanish...
s at Boulders Beach since 1985. There is no record of the birds having lived here prior to that date, so their decision to settle in an area already well-utilized by humans is remarkable. There are only three penguin populations on the mainland in southern Africa; the others are close to Hermanus
Hermanus
Hermanus is a town with 49,000 inhabitants on the southern coast of the Western Cape province of South Africa. It is famous as a place from which to watch Southern Right whales, during the southern winter and spring and is a popular retirement town...
at Stoney Point and Betty's Bay
Betty's Bay
Betty's Bay is a small holiday town situated in the Overberg coast of South Africa's Western Cape province. It is located 96 km from Cape Town beneath the rugged Kogelberg Mountains and is on the scenic R44 ocean drive between Pringle Bay and Kleinmond...
.

Simon's Town is the home of the False Bay Yacht Club which has keel boat regattas most Wednesday evenings and weekends. 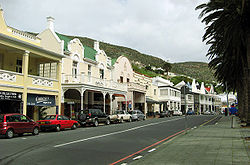 In the last weeks of 1795 or the first weeks of 1796 the British built a round tower
Martello tower
Martello towers are small defensive forts built in several countries of the British Empire during the 19th century, from the time of the Napoleonic Wars onwards....
on a site that today falls within the Naval Base. The British had just annexed the Dutch colony at the Cape of Good Hope
Cape of Good Hope
The Cape of Good Hope is a rocky headland on the Atlantic coast of the Cape Peninsula, South Africa.There is a misconception that the Cape of Good Hope is the southern tip of Africa, because it was once believed to be the dividing point between the Atlantic and Indian Oceans. In fact, the...
and wanted to establish some defenses to ward off possible Dutch or French attacks. The resulting tower was 26 feet high, had a base diameter of 42 feet, and walls 6 feet thick, though there is no evidence that the British ever installed the guns the tower was designed to hold. In front of the tower the British also constructed a battery that they did arm with cannons. The Martello Tower was used as a navigational beacon for ships entering Simon's Bay and was consequently white-washed in about 1843. The tower was restored in 1972 (in conjunction with the South African Navy
South African Navy
The South African Navy is the navy of the Republic of South Africa.-Formation:The South African Navy can trace its official origins back to the SA Naval Service, which was established on 1 April 1922....
), and proclaimed a National Monument; today it houses a small museum.