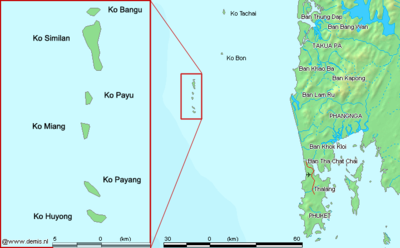 Similan Islands National Park was established after a one-year exploration by the forestry department. The park is an archipelago
Archipelago
An archipelago , sometimes called an island group, is a chain or cluster of islands. The word archipelago is derived from the Greek ἄρχι- – arkhi- and πέλαγος – pélagos through the Italian arcipelago...
consisting of nine islands named Ko Bon, Ko Bayu, Ko Similan, Ko Payu, Ko Miang (two adjoining islands), Ko Payan, Ko
Payang, and Ko Huyong. Recently, the park was expanded to included two remote islands named Ko Bon and Ko Tachai. The Similans are situated 70 kilometres from Phang Nga
Phang Nga
Phang Nga ) is a town in southern Thailand, capital of the Phang Nga Province. The town covers the whole tambon Thai Chang of Mueang Phang Nga district. As of 2005 it has a population of 9,559 and covers an area of 6.75 km²....
town. "Similan" is a Yawi word which means "nine". Similan is one of the most famous diving sites in Thailand, and noted as one of the top ten dive destinations in the world according to the National Geographic Society.

Koh Similan is the largest island. There are a total of 9 islands. The sea in the area has an average depth of 60 feet. Underwater it is full of rock formations and coral reefs in several shapes and forms, resembling such things as deer, leaves, brains, and mushrooms.

Above the water are found many diverse species such as the Nicobar Pigeon, Mangrove Monitor Lizards and more.

Koh Huyong has the longest and widest beach in the park. However, the park prohibits any tourists from landing on the island as the beach a place where turtles come to lay their eggs.

The Similan national park is famous for its dive sites. It has typically two different kinds of diving. East side diving consists of gently sloping coral reefs with sandy patches and the occasional boulder in between. The west side is known for its huge underwater granite boulders with numerous swimthroughs. Maybe the most famous east side dive site is East of Eden, off Island number 7. Elephant head rock is arguably the most famous west side dive site with a maze of swimthroughs and the reputation for spin-cycle like currents running in every direction.

Elephant head rock was named by Horst Hinrichs from Germany in the mid 70s, founder of one of the oldest dive shops in Phuket, Santana Diving. 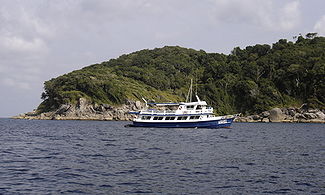 The most important of all dive sites in the Similans, which is actually part of Surin National Park, is Richelieu Rock, famous for its incomparable variety and abundance of marine life. Whale shark sightings are not uncommon here.

However, since 1999, its once most beautiful dive site, the Fantasy Reef, has been closed from all diving activities after its condition had significantly deteriorated. Park chiefs officially blame diving for the deterioration, while dive operators in the area claim that fishing boats, with or without permission, enter the national park during low season, when no dive operators are allowed in the national park. The national park also claims that the dive site suffered significant damage from the tsunami in 2004, and continues to keep the reef closed. Since noone but the national park staff is allowed to dive Fantasy Reef it has been impossible to confirm that statement.

Islands 1, 2 and 3 are closed for public due to turtle hatching protection program and reef conservation efforts. Island number 3 belongs to HM the Thai Princess. Fishing is banned in Similan and Surin National Park, however fishing boats are constantly seen in and around the Park. When diving, one can often find nets stuck to reefs and illegal fishing traps. Park rangers are posted on several islands but seem to be little interested in anything beyond collecting the national park fees, which have to be paid in cash. Consequently corruption is rife. Mid November 2007 the Rangers increased the Surin national park fee to 600bt per person from 400bt with no prior announcement and posted a patrol boat at Richelieu Rock to collect the fees.

This season many illegal fishing traps have been found outside the most common dive sites, suggesting the fishermen are betting on divers not venturing off the known dive sites. They have contained among others Giant Trevallies, Batfish, Barracudas, Golden Pilot Jacks, Giant Triggerfish etc.

The fishing traps seem to be overly abundant around Koh Bon and Koh Ta Chai.

Public awareness of this increasing problem will be the only way to change the situation so if you visit Similan and Surin National Parks and witness illegal fishing, please report your sightings. Public pressure and fear of lost revenue will eventually force the authorities to lean on the Rangers to actually do what they are supposed to do - protect the most beautiful and famous island group and dive sites in Thailand

Access to the Similan Islands is easiest from Khao Lak, Phang Nga province. The mainland office is in Thap Lamu. Boats depart daily from November-May. The trip takes three hours each way on slow boats or 70 minutes via speedboat.

During the months November-May also live-aboard boats head to the Similan Islands. These dive boats depart and return from Khao Lak, Ko Lanta, Phuket and Ranong and stay for several days at the Similan National Marine Park.