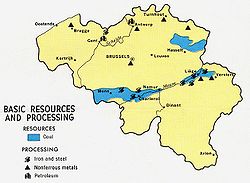 The sillon industriel is the former industrial backbone of Wallonia and thus of Belgium
Belgium
Belgium , officially the Kingdom of Belgium, is a federal state in Western Europe. It is a founding member of the European Union and hosts the EU's headquarters, and those of several other major international organisations such as NATO.Belgium is also a member of, or affiliated to, many...
. It runs across Wallonia, passing from Dour
Dour
Dour is a Walloon municipality located in the Belgian province of Hainaut. On 1 January 2006 the municipality had 16,810 inhabitants. The total area is 33.32 km², giving a population density of 505 inhabitants per km²....
, in Borinage
Borinage
The Borinage is an area in the Walloon province of Hainaut. The provincial capital Mons is located in the east of the Borinage. In French the inhabitants are called Borains...
, in the west, to Verviers
Verviers
Verviers is a Walloon city and municipality located in the Belgian province of Liège. The Verviers municipality includes the old communes of Ensival, Lambermont, Petit-Rechain, Stembert, and Heusy...
in the east, through Mons
Mons
Mons is a Walloon city and municipality located in the Belgian province of Hainaut, of which it is the capital. The Mons municipality includes the old communes of Cuesmes, Flénu, Ghlin, Hyon, Nimy, Obourg, Baudour , Jemappes, Ciply, Harmignies, Harveng, Havré, Maisières, Mesvin, Nouvelles,...
, La Louvière
La Louvière
La Louvière is a Walloon city and municipality located in the Belgian province of Hainaut. La Louvière's municipality includes the old communes of Haine-Saint-Paul, Haine-Saint-Pierre, Saint-Vaast, Trivières, Boussoit, Houdeng-Aimeries, Houdeng-Gœgnies, Maurage, and Strépy-Bracquegnies...
, Charleroi
Charleroi
Charleroi is a city and a municipality of Wallonia, located in the province of Hainaut, Belgium. , the total population of Charleroi was 201,593. The metropolitan area, including the outer commuter zone, covers an area of and had a total population of 522,522 as of 1 January 2008, ranking it as...
, Namur
Namur (city)
Namur is a city and municipality in Wallonia, in southern Belgium. It is both the capital of the province of Namur and of Wallonia....
, Huy
Huy
Huy is a municipality of Belgium. It lies in the country's Walloon Region and Province of Liege. Huy lies along the river Meuse, at the mouth of the small river Hoyoux. It is in the sillon industriel, the former industrial backbone of Wallonia, home to about two-thirds of the Walloon population...
, and Liège
Liège
Liège is a major city and municipality of Belgium located in the province of Liège, of which it is the economic capital, in Wallonia, the French-speaking region of Belgium....
, following the valleys of the rivers Haine
Haine
The Haine is a river in southern Belgium and northern France , right tributary of the river Scheldt. The Haine gave its name to the County of Hainaut, and the present province of Hainaut. Its source is in Anderlues, Belgium...
, Sambre
Sambre
The Sambre is a river in northern France and Wallonia, southern Belgium, left tributary of the Meuse River. The ancient Romans called the river Sabis.-Course:...
, Meuse
Meuse River
The Maas or Meuse is a major European river, rising in France and flowing through Belgium and the Netherlands before draining into the North Sea...
and Vesdre
Vesdre
thumb|right|250px|The course of the VesdreThe Weser or Vesdre is a river in eastern Belgium, in the province of Liège, and is a right tributary to the river Ourthe. Its source lies in the High Fens , close to the border with Germany near Monschau...
, and has an area of roughly 1000 km².

It is also known as the Sambre and Meuse valley, as those are the main rivers, or the Haine-Sambre-Meuse-Vesdre valley, which includes two smaller rivers. (French
French language
French is a Romance language spoken as a first language in France, the Romandy region in Switzerland, Wallonia and Brussels in Belgium, Monaco, the regions of Quebec and Acadia in Canada, and by various communities elsewhere. Second-language speakers of French are distributed throughout many parts...
: sillon Sambre-et-Meuse or sillon Haine-Sambre-Meuse-Vesdre) It is also called the dorsale wallonne, meaning Walloon [industrial] backbone.

It is less defined by physical geography
Physical geography
Physical geography is one of the two major subfields of geography. Physical geography is that branch of natural science which deals with the study of processes and patterns in the natural environment like the atmosphere, biosphere and geosphere, as opposed to the cultural or built environment, the...
, and is more a description of human geography
Human geography
Human geography is one of the two major sub-fields of the discipline of geography. Human geography is the study of the world, its people, communities, and cultures. Human geography differs from physical geography mainly in that it has a greater focus on studying human activities and is more...
and resource
Natural resource
Natural resources occur naturally within environments that exist relatively undisturbed by mankind, in a natural form. A natural resource is often characterized by amounts of biodiversity and geodiversity existent in various ecosystems....
s. As heavy industry
Heavy industry
Heavy industry does not have a single fixed meaning as compared to light industry. It can mean production of products which are either heavy in weight or in the processes leading to their production. In general, it is a popular term used within the name of many Japanese and Korean firms, meaning...
is no longer the prevailing feature of the Belgian economy
Economy of Belgium
The modern, private enterprise economy of Belgium has capitalised on its central geographic location, highly developed transport network, and diversified industrial and commercial base...
, it is now more common to refer to the area as the former industrial belt.

Around two-thirds of the population of Wallonia lives in the area – over two million people. Its main stretch is sometimes called the Charleroi-Liège valley, which connects Charleroi and Liège. Some see it as a Walloon metropolis
Metropolis
A metropolis is a very large city or urban area which is a significant economic, political and cultural center for a country or region, and an important hub for regional or international connections and communications...
, albeit much more linear and less centralized than most.

The sillon industriel was the first fully industrialized
Industrialisation
Industrialization is the process of social and economic change that transforms a human group from an agrarian society into an industrial one...
area in continental Europe
Continental Europe
Continental Europe, also referred to as mainland Europe or simply the Continent, is the continent of Europe, explicitly excluding European islands....
. Its industry brought much wealth to Belgium, and it was the economic core of the country. This continued until after World War II
World War II
World War II, or the Second World War , was a global conflict lasting from 1939 to 1945, involving most of the world's nations—including all of the great powers—eventually forming two opposing military alliances: the Allies and the Axis...
, when the importance of Belgian steel, coal and industry began to diminish. The region's economy shifted towards extraction of non-metallic raw materials such as glass
Glass
Glass is an amorphous solid material. Glasses are typically brittle and optically transparent.The most familiar type of glass, used for centuries in windows and drinking vessels, is soda-lime glass, composed of about 75% silica plus Na2O, CaO, and several minor additives...
and soda
Sodium carbonate
Sodium carbonate , Na2CO3 is a sodium salt of carbonic acid. It most commonly occurs as a crystalline heptahydrate, which readily effloresces to form a white powder, the monohydrate. Sodium carbonate is domestically well-known for its everyday use as a water softener. It can be extracted from the...
, which lasted until the 1970s. The days of prosperity were gone, however, and a trend of unemployment and economic dependence on the formerly poorer Flemish Region
Flemish Region
The Flemish Region is one of the three official regions of the Kingdom of Belgium—alongside the Walloon Region and the Brussels-Capital Region. Colloquially, it is usually simply referred to as Flanders, of which it is the institutional iteration within the context of the Belgian political system...
began, and continues to this day.

The region has seen numerous general strike
General strike
A general strike is a strike action by a critical mass of the labour force in a city, region, or country. While a general strike can be for political goals, economic goals, or both, it tends to gain its momentum from the ideological or class sympathies of the participants...
s, some with social aims, some with political aims. In 1886, due to economic crisis, lowering of salaries and unemployment; in 1893, 1902 and 1913, as a struggle for universal suffrage
Universal suffrage
Universal suffrage consists of the extension of the right to vote to adult citizens as a whole, though it may also mean extending said right to minors and non-citizens...
. More strikes occurred in 1932 and 1936, with a strike in 1950 on the question of the return of Leopold III to the Belgian throne. The region was at the heart of the general strike of winter 1960-1961, which helped Wallonia to gain autonomy. It was also the site of the first dechristianisation in Belgium, and the most ferocious opposition to Leopold III
Leopold III of Belgium
Leopold III reigned as King of the Belgians from 1934 until 1951, when he abdicated in favour of the Heir Apparent,...
.

The region is the base of the Belgian francophone Socialist Party
Socialist Party (francophone Belgium)
The Socialist Party is a Francophone social-democratic political party in Belgium. As of the 2010 elections, it is the second largest party in the Belgian Chamber of Representatives and the largest Francophone party...
(Parti Socialiste) in Wallonia. Some of the region qualifies for Objective 1 or Objective 2 status under the Regional policy of the European Union because of its low GDP per capita. This is to encourage growth in the area. This is rare in Western Europe
Western Europe
Western Europe is a loose term for the collection of countries in the western most region of the European continents, though this definition is context-dependent and carries cultural and political connotations. One definition describes Western Europe as a geographic entity—the region lying in the...
.