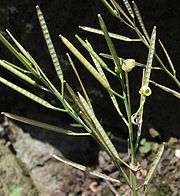 A silique or siliqua is a fruit
Fruit
In broad terms, a fruit is a structure of a plant that contains its seeds.The term has different meanings dependent on context. In non-technical usage, such as food preparation, fruit normally means the fleshy seed-associated structures of certain plants that are sweet and edible in the raw state,...
(seed capsule
Capsule (fruit)
In botany a capsule is a type of simple, dry fruit produced by many species of flowering plants. A capsule is a structure composed of two or more carpels that in most cases is dehiscent, i.e. at maturity, it splits apart to release the seeds within. A few capsules are indehiscent, for example...
) of 2 fused carpels with the length being more than three times the width. The outer walls of the ovary (the valves) usually separate when ripe, leaving a persistent partition (the replum). This classification includes many members of the Brassicaceae
Brassicaceae
Brassicaceae, a medium sized and economically important family of flowering plants , are informally known as the mustards, mustard flowers, the crucifers or the cabbage family....
family, but some species have a shorter fruit of similar structure, in which case the fruit is called silicle. Some species that are closely related to plants with true siliques have fruits with a similar structure that do not open when ripe; these are usually called indehiscent siliques (compare dehiscence
Dehiscence (botany)
Dehiscence is the opening, at maturity, in a pre-defined way, of a plant structure, such as a fruit, anther, or sporangium, to release its contents. Sometimes this involves the complete detachment of a part. Structures that open in this way are said to be dehiscent...
).