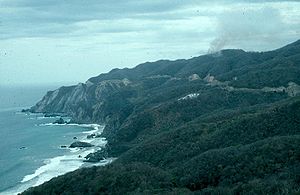 The Sierra Madre del Sur pine-oak forests
Sierra Madre del Sur pine-oak forests
The Sierra Madre del Sur pine-oak forests is a subtropical coniferous forest ecoregion of the Sierra Madre del Sur mountain range of southern Mexico.-Setting:...
occupy the higher reaches of the range. These forests are part of a chain of Mesoamerican pine-oak forests
Mesoamerican pine-oak forests
The Mesoamerican pine-oak forests is a composite ecoregion of southern Mexico and Central America, designated by the World Wildlife Fund as one of their Global 200 ecoregions, a list of priority ecoregions for conservation....
that stretch from the Southwestern United States
Southwestern United States
The Southwestern United States is a region defined in different ways by different sources. Broad definitions include nearly a quarter of the United States, including Arizona, California, Colorado, Nevada, New Mexico, Oklahoma, Texas and Utah...
to Costa Rica
Costa Rica
Costa Rica , officially the Republic of Costa Rica is a multilingual, multiethnic and multicultural country in Central America, bordered by Nicaragua to the north, Panama to the southeast, the Pacific Ocean to the west and the Caribbean Sea to the east....
along the American Cordillera
American cordillera
The American Cordillera is a cordillera that consists of an essentially continuous sequence of mountain ranges that form the western "backbone" of North America, Central America, South America and Antarctica. From north to south, this sequence of overlapping and parallel ranges begins with the...
.

Lower elevations of the range are covered by tropical dry forests, ecoregion
Ecoregion
An ecoregion , sometimes called a bioregion, is an ecologically and geographically defined area that is smaller than an ecozone and larger than an ecosystem. Ecoregions cover relatively large areas of land or water, and contain characteristic, geographically distinct assemblages of natural...
s in the Tropical and subtropical dry broadleaf forests
Tropical and subtropical dry broadleaf forests
The tropical and subtropical dry broadleaf forest biome, also known as tropical dry forest, is located at tropical and subtropical latitudes. Though these forests occur in climates that are warm year-round, and may receive several hundred centimeters of rain per year, they have long dry seasons...
Biome
Biome
Biomes are climatically and geographically defined as similar climatic conditions on the Earth, such as communities of plants, animals, and soil organisms, and are often referred to as ecosystems. Some parts of the earth have more or less the same kind of abiotic and biotic factors spread over a...
. The Jalisco dry forests occupy the western end of the range's Pacific slope. The Southern Pacific dry forests occupy most of the Pacific slope of the range, from Michoacan in the west through Guerrero and Oaxaca. The basin of the Balsas River, north of the Sierra, is home to the Balsas dry forests
Balsas dry forests
The Balsas dry forests are a tropical dry broadleaf forest ecoregion of southern Mexico.-Setting:The Balsas dry forests occupy the basin of the Balsas River. the ecoregion covers an area of , extending across portions of Michoacan, Guerrero, Mexico, Morelos, Puebla, and Oaxaca states...
.