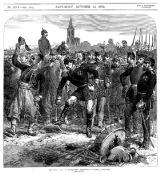 Encyclopedia
The Siege of Strasbourg
Strasbourg
Strasbourg is the capital and principal city of the Alsace region in eastern France and is the official seat of the European Parliament. Located close to the border with Germany, it is the capital of the Bas-Rhin département. The city and the region of Alsace are historically German-speaking,...
took place during the Franco-Prussian War
Franco-Prussian War
The Franco-Prussian War or Franco-German War, often referred to in France as the 1870 War was a conflict between the Second French Empire and the Kingdom of Prussia. Prussia was aided by the North German Confederation, of which it was a member, and the South German states of Baden, Württemberg and...
, and resulted in the French
Second French Empire
The Second French Empire or French Empire was the Imperial Bonapartist regime of Napoleon III from 1852 to 1870, between the Second Republic and the Third Republic, in France.-Rule of Napoleon III:...
surrender of the fortress on 28 September 1870.

After the Battle of Worth, Crown Prince Frederick detached General von Werder
Karl Wilhelm Friedrich August Leopold, Count von Werder
Karl Wilhelm Friedrich August Leopold Graf von Werder was a Prussian general.Werder was born in Schloßberg near Norkitten in the Province of East Prussia. He entered the Prussian Gardes du Corps in 1825, transferring the following year into the Guard Infantry, with which he served for many years...
to move south against the fortress of Strasbourg
Strasbourg
Strasbourg is the capital and principal city of the Alsace region in eastern France and is the official seat of the European Parliament. Located close to the border with Germany, it is the capital of the Bas-Rhin département. The city and the region of Alsace are historically German-speaking,...
. At the time, Strasbourg (along with Metz
Metz
Metz is a city in the northeast of France located at the confluence of the Moselle and the Seille rivers.Metz is the capital of the Lorraine region and prefecture of the Moselle department. Located near the tripoint along the junction of France, Germany, and Luxembourg, Metz forms a central place...
) was considered to be one of the strongest fortresses in France. Werder's force was made up of 40,000 troops from Württemberg
Kingdom of Württemberg
The Kingdom of Württemberg was a state that existed from 1806 to 1918, located in present-day Baden-Württemberg, Germany. It was a continuation of the Duchy of Württemberg, which came into existence in 1495...
and Baden
Grand Duchy of Baden
The Grand Duchy of Baden was a historical state in the southwest of Germany, on the east bank of the Rhine. It existed between 1806 and 1918.-History:...
, which lay just across the Rhine River from Strasbourg. The French garrison of 17,000 was under the command of the 68-year-old General Uhrich.

Werder understood the value of capturing the city, and ruled out a lengthy siege of starvation. He instead decided on a quicker action, bombarding the fortifications and the civilian population into submission.

On 23 August Werder's siege guns opened fire on the city and caused considerable damage to the city and many of its historical landmarks. The Bishop of Strasbourg went to Werder to beg for a ceasefire, and the civilian population suggested paying 100,000 francs
French franc
The franc was a currency of France. Along with the Spanish peseta, it was also a de facto currency used in Andorra . Between 1360 and 1641, it was the name of coins worth 1 livre tournois and it remained in common parlance as a term for this amount of money...
to Werder each day he did not bomb the city. Uhrich refused to relent, and soon enough Werder realized he could not keep up such a bombardment with the amount of ammunition he had.

On 24 August, the Museum of Fine Arts was destroyed by fire, as was the Municipal Library housed in the Gothic former Dominican Church, with its unique collection of medieval manuscripts, rare Renaissance books and Roman artifacts.

Werder continued bombing the city, this time targeting selected fortifications. The German siege lines moved rapidly closer to the city as each fortress was turned into rubble. On 11 September, a delegation of Swiss officials went into the city to evacuate non-combatants. This delegation brought in news of the defeat of the French at the Battle of Sedan
Battle of Sedan
The Battle of Sedan was fought during the Franco-Prussian War on 1 September 1870. It resulted in the capture of Emperor Napoleon III and large numbers of his troops and for all intents and purposes decided the war in favour of Prussia and its allies, though fighting continued under a new French...
, which meant no relief was coming to Strasbourg. On 19 September the remaining civilians urged Uhrich to surrender the city, but he refused, believing a defense was still possible. However, that same day Werder stormed and captured the first of the city's fortifications. This event caused Uhrich to reconsider his ability to defend the city. On 27 September Uhrich opened negotiations with Werder, and the city surrendered the following day.

The fall of Strasbourg freed Werder's forces for further operations in northeastern France. His next move was against the city of Belfort
Belfort
Belfort is a commune in the Territoire de Belfort department in Franche-Comté in northeastern France and is the prefecture of the department. It is located on the Savoureuse, on the strategically important natural route between the Rhine and the Rhône – the Belfort Gap or Burgundian Gate .-...
, which was invested in November.
The source of this article is wikipedia, the free encyclopedia.  The text of this article is licensed under the GFDL.