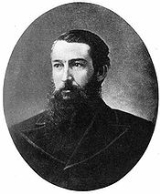 Overview
Sidney Lanier was an American
United States
The United States of America is a federal constitutional republic comprising fifty states and a federal district...
music
Music
Music is an art form whose medium is sound and silence. Its common elements are pitch , rhythm , dynamics, and the sonic qualities of timbre and texture...
ian and poet
Poet
A poet is a person who writes poetry. A poet's work can be literal, meaning that his work is derived from a specific event, or metaphorical, meaning that his work can take on many meanings and forms. Poets have existed since antiquity, in nearly all languages, and have produced works that vary...
.
Sidney Lanier was born February 3, 1842, in Macon
Macon, Georgia
Macon is a city located in central Georgia, US. Founded at the fall line of the Ocmulgee River, it is part of the Macon metropolitan area, and the county seat of Bibb County. A small portion of the city extends into Jones County. Macon is the biggest city in central Georgia...
, Georgia
Georgia (U.S. state)
Georgia is a state located in the southeastern United States. It was established in 1732, the last of the original Thirteen Colonies. The state is named after King George II of Great Britain. Georgia was the fourth state to ratify the United States Constitution, on January 2, 1788...
, to parents Robert Sampson Lanier and Mary Jane Anderson; he was mostly of English ancestry. His distant French Huguenot ancestors immigrated to England
England
England is a country that is part of the United Kingdom. It shares land borders with Scotland to the north and Wales to the west; the Irish Sea is to the north west, the Celtic Sea to the south west, with the North Sea to the east and the English Channel to the south separating it from continental...
in the 16th century fleeing religious persecution. He began playing the flute
Flute
The flute is a musical instrument of the woodwind family. Unlike woodwind instruments with reeds, a flute is an aerophone or reedless wind instrument that produces its sound from the flow of air across an opening...
at an early age, and his love of that musical instrument
Musical instrument
A musical instrument is a device created or adapted for the purpose of making musical sounds. In principle, any object that produces sound can serve as a musical instrument—it is through purpose that the object becomes a musical instrument. The history of musical instruments dates back to the...
continued throughout his life.

I HAVE A BOOK POEMS OF SIDNEY LANIER; EDITED BY HIS WIFE:BY LANIER PUBLISHED 1913 BUT FOUND A SITE THAT STATES 1915. WAS ANOTHER BOOK PUBLISHED OR WAS...
More

Virginal shy lights,Wrought of the leaves to allure to the whisper of vows,When lovers pace timidly down through the green colonnadesOf the dim sweet woods, of the dear dark woods,Of the heavenly woods and glades,That run to the radiant marginal sand-beach withinThe wide sea-marshes of Glynn.

The sun is a-wait at the ponderous gate of the West.

Ye marshes, how candid and simple and nothing-withholding and freeYe publish yourselves to the sky and offer yourselves to the sea!Tolerant plains, that suffer the sea and the rains and the sun,Ye spread and span like the catholic man who hath mightily wonGod out of knowledge and good out of infinite painAnd sight out of blindness and purity out of a stain.

The incalculable Up-and-Down of Time.