Encyclopedia
Shrewsbury Castle is a red sandstone
Sandstone
Sandstone is a sedimentary rock composed mainly of sand-sized minerals or rock grains.Most sandstone is composed of quartz and/or feldspar because these are the most common minerals in the Earth's crust. Like sand, sandstone may be any colour, but the most common colours are tan, brown, yellow,...
castle
Castle
A castle is a type of fortified structure built in Europe and the Middle East during the Middle Ages by European nobility. Scholars debate the scope of the word castle, but usually consider it to be the private fortified residence of a lord or noble...
in Shrewsbury
Shrewsbury
Shrewsbury is the county town of Shropshire, in the West Midlands region of England. Lying on the River Severn, it is a civil parish home to some 70,000 inhabitants, and is the primary settlement and headquarters of Shropshire Council...
, Shropshire
Shropshire
Shropshire is a county in the West Midlands region of England. For Eurostat purposes, the county is a NUTS 3 region and is one of four counties or unitary districts that comprise the "Shropshire and Staffordshire" NUTS 2 region. It borders Wales to the west...
, England
England
England is a country that is part of the United Kingdom. It shares land borders with Scotland to the north and Wales to the west; the Irish Sea is to the north west, the Celtic Sea to the south west, with the North Sea to the east and the English Channel to the south separating it from continental...
. It stands on a hill in the neck of the meander of the River Severn
River Severn
The River Severn is the longest river in Great Britain, at about , but the second longest on the British Isles, behind the River Shannon. It rises at an altitude of on Plynlimon, Ceredigion near Llanidloes, Powys, in the Cambrian Mountains of mid Wales...
on which the town originally developed. The castle is situated directly above Shrewsbury railway station
Shrewsbury railway station
Shrewsbury railway station is the railway station serving Shrewsbury, county town of Shropshire, England. It is the only remaining railway station in the town; Shrewsbury Abbey, as well as other small stations around the town, having long closed. The station was built in 1848 and has been extended...
.

In 1138, King Stephen
Stephen of England
Stephen , often referred to as Stephen of Blois , was a grandson of William the Conqueror. He was King of England from 1135 to his death, and also the Count of Boulogne by right of his wife. Stephen's reign was marked by the Anarchy, a civil war with his cousin and rival, the Empress Matilda...
successfully besieged the castle held by William FitzAlan for the Empress Maud during the period known as The Anarchy
The Anarchy
The Anarchy or The Nineteen-Year Winter was a period of English history during the reign of King Stephen, which was characterised by civil war and unsettled government...
. The castle was also briefly held by Llywelyn ap Iorwerth, prince of Wales
Prince of Wales
Prince of Wales is a title traditionally granted to the heir apparent to the reigning monarch of the United Kingdom of Great Britain and Northern Ireland and the 15 other independent Commonwealth realms...
, in 1215. Little of this original physical structure remains.

The Shropshire Horticultural Society bought the castle
Castle
A castle is a type of fortified structure built in Europe and the Middle East during the Middle Ages by European nobility. Scholars debate the scope of the word castle, but usually consider it to be the private fortified residence of a lord or noble...
and gave it to the town in 1924. Until 1981, borough council meetings, where the full council would be present, used the castle's hall. Meetings later moved to Oakley Manor in Belle Vue, and then to the Guildhall in Frankwell
Frankwell
Frankwell is a district of the town of Shrewsbury, in Shropshire, England. It lies adjacent to the River Severn, to the northwest of the town centre, and is one of Shrewsbury's oldest suburbs....
.

Laura's Tower overlooks the surrounding townscape and further out to the countryside. Marriage
Marriage
Marriage is a social union or legal contract between people that creates kinship. It is an institution in which interpersonal relationships, usually intimate and sexual, are acknowledged in a variety of ways, depending on the culture or subculture in which it is found...
s have taken place here and the castle grounds are used sometimes for plays
Play (theatre)
A play is a form of literature written by a playwright, usually consisting of scripted dialogue between characters, intended for theatrical performance rather than just reading. There are rare dramatists, notably George Bernard Shaw, who have had little preference whether their plays were performed...
, which have included the Canterbury Tales, among others. 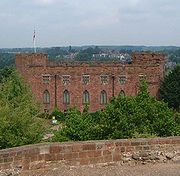