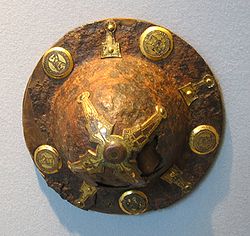 A shield boss, or umbo, is a round, convex or conical piece of material at the centre of a shield
Shield
A shield is a type of personal armor, meant to intercept attacks, either by stopping projectiles such as arrows or redirecting a hit from a sword, mace or battle axe to the side of the shield-bearer....
. Shield bosses (or sometimes, just "bosses") are usually made of thick metal but could also be made of wood. The boss was originally designed to deflect blows from the centre of round shields, though they also provided a place to mount the shield's grip. As time went on and heater shield
Heater shield
The heater shield or heater-shaped shield is a form of European medieval shield, developing from the early medieval kite shield in ca. the mid 13th century....
s with curved bodies became more popular, and enarmes
Enarmes
Enarmes are the leather gripping straps attached to the back of shields throughout the Medieval period.Enarmes represented a significant advance in shield technology, as beforehand shields were held by a single bar that ran behind a boss. Enarmes were held in place by riveting through the leather...
superseded the bar grip, the boss became more of an ornamental piece.

Often, bosses are not present on non-circular shields due to the differences in technique; with a round shield, one makes a punch
Punch (strike)
A punch is a striking blow with the fist. It is the most commonly used attack in hand to hand combat. It is used in some martial arts and combat sports, most notably boxing where it is the only type of technique allowed...
ing motion towards an oncoming blow, while with a heater or kite shield, attacks are blocked by pivoting the shield about the body. A boss provides a significant advantage for deflecting blows when using a punching motion, but is not very effective when using a pivot to block an attack.

In medieval times, shield bosses were made by armourers out of sheets of iron or steel. The armourer started with a flat, relatively thin sheet and sank the metal into a bowl, which might then be planished
Planishing
Planishing is a metalworking technique that involves finishing the surface by finely shaping and smoothing sheet metal...
and buffed
Polishing
Polishing is the process of creating a smooth and shiny surface by rubbing it or using a chemical action, leaving a surface with a significant specular reflection In some materials polishing is also able to reduce diffuse reflection to...
.