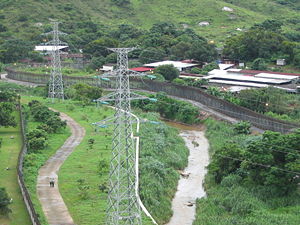 It formed part of the limit of the lease
Concession (territory)
In international law, a concession is a territory within a country that is administered by an entity other than the state which holds sovereignty over it. This is usually a colonizing power, or at least mandated by one, as in the case of colonial chartered companies.Usually, it is conceded, that...
of the New Territories
New Territories
New Territories is one of the three main regions of Hong Kong, alongside Hong Kong Island and the Kowloon Peninsula. It makes up 86.2% of Hong Kong's territory. Historically, it is the region described in The Convention for the Extension of Hong Kong Territory...
in 1898 in the Convention for the Extension of Hong Kong Territory (also Second Convention of Peking).

It lies in the North District
North District, Hong Kong
North District is the northernmost district of the 18 districts of Hong Kong. It is located in the northwestern part of the New Territories. The new town of Fanling-Sheung Shui is within this district. It had a population of 298,657 in 2001. The district has the second lowest population density.It...
of Hong Kong, and the city of Shenzhen
Shenzhen
Shenzhen is a major city in the south of Southern China's Guangdong Province, situated immediately north of Hong Kong. The area became China's first—and one of the most successful—Special Economic Zones...
, Guangdong
Guangdong
Guangdong is a province on the South China Sea coast of the People's Republic of China. The province was previously often written with the alternative English name Kwangtung Province...
. Its source is at Wutong Mountain
Wutong Mountain
Wutong Mountain is a mountain located near the border of Luohu and Yantian in Shenzhen, China. At 943.7m, it is the tallest mountain in Shenzhen.The mountain is source of the Sham Chun River that flows into Shenzhen and Hong Kong....
, Shenzhen. Its tributaries
Tributary
A tributary or affluent is a stream or river that flows into a main stem river or a lake. A tributary does not flow directly into a sea or ocean...
includes Ping Yuen River
Ping Yuen River
Ping Yuen River is a river in northern New Territories, Hong Kong. Its source lies near Cheung Shan in Ping Che. It flows along Ping Che Road and into the River Ganges Pumping Station near Chau Tin Village before emptying into Sham Chun River.-External links:*, in Chinese...
, Shek Sheung River
Shek Sheung River
Shek Sheung River , is a river in northern New Territories, Hong Kong. It originates from near Choi Po Court and Hong Kong Golf Club. The river flows beside East Rail Line and eventually empties into Ng Tung River.-External links:*, in Chinese...
, Sheung Yue River
Sheung Yue River
Sheung Yue River is a river in northern New Territories, Hong Kong. Its sources are near Kai Kung Leng and Ki Lun Shan, where numerous streams flow into the river. It flows through Kwu Tung and Sheung Shui. It joins up with Shek Sheung River and eventually empties into Ng Tung River.Beas River...
, Ng Tung River
Ng Tung River
Ng Tung River is a river in the northeast New Territories, Hong Kong. Tributaries of the river include Tan Shan River and Kwan Tei River. It collects other major rivers like Shek Sheung River and Sheung Yue River in Sheung Shui, and finally empties into Sham Chun River .- External links :* , in...
, Buji River and Tan Shan River
Tan Shan River
The Tan Shan River is a river in northeastern New Territories, Hong Kong. The river originates in Ping Fung Shan near Pat Sin Leng. It flows through Hok Tau Reservoir and Ping Che before finally emptying into Ng Tung River near Kwan Tei.-External links:*, in Chinese...
. The Shenzhen Reservoir also flows into the river when it is full.

The river flows into Deep Bay
Deep Bay, Hong Kong
Deep Bay is a bay off the northwest coast of Lau Fau Shan, Hong Kong. It is surrounded to the north by Shenzhen proper and west by the peninsula of Nantau, China. It is also known as Hau Hoi Wan in Hong Kong, and Shenzhen Bay in China.-Name:...
(also known as Hau Hoi Wan and Shenzhen Bay). The Mai Po Marshes
Mai Po Marshes
Mai Po Marshes is a nature reserve located near Yuen Long in Hong Kong. It is part of Deep Bay, an internationally significant wetland that is actually a shallow estuary, at the mouths of Sham Chun River, Shan Pui River and Tin Shui Wai Nullah...
is at its estuary
Estuary
An estuary is a partly enclosed coastal body of water with one or more rivers or streams flowing into it, and with a free connection to the open sea....
.

Efforts have be paid to alleviate the flooding and pollution problems. Part of its course was straightened, leading to a shift of boundary. Some one square kilometer of land became Hong Kong's territory after the works.