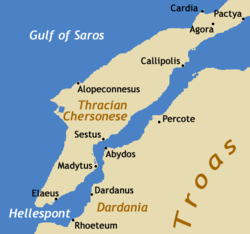 Sestos was an ancient Greek
Ancient Greek
Ancient Greek is the stage of the Greek language in the periods spanning the times c. 9th–6th centuries BC, , c. 5th–4th centuries BC , and the c. 3rd century BC – 6th century AD of ancient Greece and the ancient world; being predated in the 2nd millennium BC by Mycenaean Greek...
town of the Thracian Chersonese
Thracian Chersonese
The Thracian Chersonese was the ancient name of the Gallipoli peninsula, in the part of historic Thrace that is now part of modern Turkey.The peninsula runs in a south-westerly direction into the Aegean Sea, between the Hellespont and the bay of Melas . Near Agora it was protected by a wall...
, the modern Gallipoli
Gallipoli
The Gallipoli peninsula is located in Turkish Thrace , the European part of Turkey, with the Aegean Sea to the west and the Dardanelles straits to the east. Gallipoli derives its name from the Greek "Καλλίπολις" , meaning "Beautiful City"...
peninsula in European Turkey
Turkey
Turkey , known officially as the Republic of Turkey , is a Eurasian country located in Western Asia and in East Thrace in Southeastern Europe...
. Situated on the Hellespont opposite Abydos
Abydos, Hellespont
For other uses, see Abydos Abydos , an ancient city of Mysia, in Asia Minor, situated at Nara Burnu or Nagara Point on the best harbor on the Asiatic shore of the Hellespont. Across Abydos lies Sestus on the European side marking the shortest point in the Dardanelles, scarcely a mile broad...
, it was the home of Hero in the legend of Hero and Leander
Hero and Leander
Hero and Leander is a Byzantine myth, relating the story of Hērō and like "hero" in English), a priestess of Aphrodite who dwelt in a tower in Sestos on the European side of the Dardanelles, and Leander , a young man from Abydos on the opposite side of the strait. Leander fell in love with Hero...
, where according to legend she lived in a tower overlooking the sea. Sestos was an Aeolian
Aeolians
The Aeolians were one of the four major ancient Greek tribes comprising Ancient Greeks. Their name derives from Aeolus, the mythical ancestor of the Aeolic branch and son of Hellen, the mythical patriarch of the Greek nation...
colony, as it was founded by settlers from Lesbos. The ruins of the town are near to the modern settlement of Eceabat
Eceabat
Eceabat, formerly Maydos , is a town and district of Çanakkale Province in the Marmara region of Turkey, located on the eastern shore of the Gelibolu Peninsula, on the Dardanelles Strait. According to the 2010 census, population of the district is 9,154 of which 5,380 live in the town of Eceabat...
.

Xerxes' army crossed at this point on a temporary pontoon bridge
Pontoon bridge
A pontoon bridge or floating bridge is a bridge that floats on water and in which barge- or boat-like pontoons support the bridge deck and its dynamic loads. While pontoon bridges are usually temporary structures, some are used for long periods of time...
in 480 BC, and most of Alexander the Great's forces went the other way here by boat in 334 BC.

In 1810 Lord Byron swam from Sestos to Abydos in four hours, recreating Leander's feat. This event is commemorated every year with an annual swim event that recreates the crossing.

Little now remains of the ancient town of Sestos.


The Siege of Sestos

In 479BC-478BC, after the Greek victories (against Persia) at Plataea
Battle of Plataea
The Battle of Plataea was the final land battle during the second Persian invasion of Greece. It took place in 479 BC near the city of Plataea in Boeotia, and was fought between an alliance of the Greek city-states, including Sparta, Athens, Corinth and Megara, and the Persian Empire of Xerxes...
and Mycale
Battle of Mycale
The Battle of Mycale was one of the two major battles that ended the second Persian invasion of Greece during the Greco-Persian Wars. It took place on or about August 27, 479 BC on the slopes of Mount Mycale, on the coast of Ionia, opposite the island of Samos...
, Greek forces under the command of Xanthippus
Xanthippus
Xanthippus was a Greek mercenary general hired by the Carthaginians to aid in their war against the Romans during the First Punic War...
besieged and defeated the Persian garrison at Sestos allowing the Greeks to conquer the city. As a result, Persian influence along the Hellespont was significantly reduced. This served the dual goal of denying Persian land forces access to the Greek mainland, while restoring Athenian trade to Black Sea
Black Sea
The Black Sea is bounded by Europe, Anatolia and the Caucasus and is ultimately connected to the Atlantic Ocean via the Mediterranean and the Aegean seas and various straits. The Bosphorus strait connects it to the Sea of Marmara, and the strait of the Dardanelles connects that sea to the Aegean...
ports such as Byzantium
Byzantium
Byzantium was an ancient Greek city, founded by Greek colonists from Megara in 667 BC and named after their king Byzas . The name Byzantium is a Latinization of the original name Byzantion...
.
The source of this article is wikipedia, the free encyclopedia.  The text of this article is licensed under the GFDL.