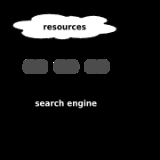 Search engines provide an interface
Interface (computer science)
In the field of computer science, an interface is a tool and concept that refers to a point of interaction between components, and is applicable at the level of both hardware and software...
to a group of items that enables users to specify criteria about an item of interest and have the engine find the matching items. The criteria are referred to as a search query. In the case of text search engines, the search query is typically expressed as a set of words that identify the desired concept
Concept
The word concept is used in ordinary language as well as in almost all academic disciplines. Particularly in philosophy, psychology and cognitive sciences the term is much used and much discussed. WordNet defines concept: "conception, construct ". However, the meaning of the term concept is much...
that one or more document
Document
The term document has multiple meanings in ordinary language and in scholarship. WordNet 3.1. lists four meanings :* document, written document, papers...
s may contain. There are several styles of search query syntax
Syntax
In linguistics, syntax is the study of the principles and rules for constructing phrases and sentences in natural languages....
that vary in strictness. It can also switch names within the search engines from previous sites. Whereas some text search engines require users to enter two or three words separated by white space
Whitespace (computer science)
In computer science, whitespace is any single character or series of characters that represents horizontal or vertical space in typography. When rendered, a whitespace character does not correspond to a visual mark, but typically does occupy an area on a page...
, other search engines may enable users to specify entire documents, pictures, sounds, and various forms of natural language
Natural language
In the philosophy of language, a natural language is any language which arises in an unpremeditated fashion as the result of the innate facility for language possessed by the human intellect. A natural language is typically used for communication, and may be spoken, signed, or written...
. Some search engines apply improvements to search queries to increase the likelihood of providing a quality set of items through a process known as query expansion
Query expansion
Query expansion is the process of reformulating a seed query to improve retrieval performance in information retrieval operations.In the context of web search engines, query expansion involves evaluating a user's input and expanding the search query to match additional documents...
. 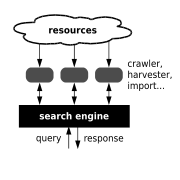 The list of items that meet the criteria specified by the query is typically sorted, or ranked. Ranking items by relevance (from highest to lowest) reduces the time required to find the desired information. Probabilistic
Probability
Probability is ordinarily used to describe an attitude of mind towards some proposition of whose truth we arenot certain. The proposition of interest is usually of the form "Will a specific event occur?" The attitude of mind is of the form "How certain are we that the event will occur?" The...
search engines rank items based on measures of similarity
String metric
In mathematics, string metrics are a class of metric that measure similarity or dissimilarity between two text strings for approximate string matching or comparison and in fuzzy string searching. For example the strings "Sam" and "Samuel" can be considered to be similar...
(between each item and the query, typically on a scale of 1 to 0, 1 being most similar) and sometimes popularity
Popularity
Popularity is the quality of being well-liked or common, or having a high social status. Popularity figures are an important part of many people's personal value systems and form a vital component of success in people-oriented fields such as management, politics, and entertainment, among...
or authority
Authority
The word Authority is derived mainly from the Latin word auctoritas, meaning invention, advice, opinion, influence, or command. In English, the word 'authority' can be used to mean power given by the state or by academic knowledge of an area .-Authority in Philosophy:In...
(see Bibliometrics
Bibliometrics
Bibliometrics is a set of methods to quantitatively analyze scientific and technological literature. Citation analysis and content analysis are commonly used bibliometric methods...
) or use relevance feedback
Relevance feedback
Relevance feedback is a feature of some information retrieval systems. The idea behind relevance feedback is to take the results that are initially returned from a given query and to use information about whether or not those results are relevant to perform a new query...
. Boolean
Boolean logic
Boolean algebra is a logical calculus of truth values, developed by George Boole in the 1840s. It resembles the algebra of real numbers, but with the numeric operations of multiplication xy, addition x + y, and negation −x replaced by the respective logical operations of...
search engines typically only return items which match exactly without regard to order, although the term boolean search engine may simply refer to the use of boolean-style syntax (the use of operators AND
Logical conjunction
In logic and mathematics, a two-place logical operator and, also known as logical conjunction, results in true if both of its operands are true, otherwise the value of false....
, OR
Logical disjunction
In logic and mathematics, a two-place logical connective or, is a logical disjunction, also known as inclusive disjunction or alternation, that results in true whenever one or more of its operands are true. E.g. in this context, "A or B" is true if A is true, or if B is true, or if both A and B are...
, NOT, and XOR) in a probabilistic context.

To provide a set of matching items that are sorted according to some criteria quickly, a search engine will typically collect metadata
Metadata
The term metadata is an ambiguous term which is used for two fundamentally different concepts . Although the expression "data about data" is often used, it does not apply to both in the same way. Structural metadata, the design and specification of data structures, cannot be about data, because at...
about the group of items under consideration beforehand through a process referred to as indexing
Index (search engine)
Search engine indexing collects, parses, and stores data to facilitate fast and accurate information retrieval. Index design incorporates interdisciplinary concepts from linguistics, cognitive psychology, mathematics, informatics, physics, and computer science...
. The index typically requires a smaller amount of computer storage
Computer storage
Computer data storage, often called storage or memory, refers to computer components and recording media that retain digital data. Data storage is one of the core functions and fundamental components of computers....
, which is why some search engines only store the indexed information and not the full content of each item, and instead provide a method of navigating to the items in the search engine result page. Alternatively, the search engine may store a copy of each item in a cache
Cache
In computer engineering, a cache is a component that transparently stores data so that future requests for that data can be served faster. The data that is stored within a cache might be values that have been computed earlier or duplicates of original values that are stored elsewhere...
so that users can see the state of the item at the time it was indexed or for archive purposes or to make repetitive processes work more efficiently and quickly.

Other types of search engines do not store an index. Crawler, or spider type search engines (a.k.a. real-time search engines) may collect and assess items at the time of the search query, dynamically considering additional items based on the contents of a starting item (known as a seed, or seed URL in the case of an Internet crawler). Meta search engines store neither an index nor a cache and instead simply reuse the index or results of one or more other search engines to provide an aggregated, final set of results.
The source of this article is wikipedia, the free encyclopedia.  The text of this article is licensed under the GFDL.