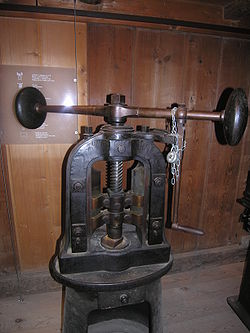 A screw press is a type of machine press
Machine press
A machine press, commonly shortened to press, is a machine tool that changes the shape of a workpiece.-Servomechanism:A servomechanism press, also known as a servo press or a electro press, is a press driven by an AC servo motor. The torque produced is converted to a linear force via a ball screw....
in which the ram is driven up and down by a screw. The screw shaft can be driven by a handle, or a wheel. It works by using a coarse screw
Screw (simple machine)
A screw is a mechanism that converts rotational motion to linear motion, and a torque to a linear force. It is one of the six classical simple machines. The most common form consists of a cylindrical shaft with helical grooves or ridges called threads around the outside...
to convert the rotation of the handle or drive-wheel into a small downward movement of greater force. The overhead handle usually incorporates balls as a flyweight. This weight helps to maintain the momentum and thrust of the tool to make it easier to operate.

The screw press was first invented and used by the Romans in the first century C.E. It was used primarily in wine and olive oil production. The screwpress was also used in Gutenberg's printing press in the mid-15th century.

A press is a metalworking
Metalworking
Metalworking is the process of working with metals to create individual parts, assemblies, or large scale structures. The term covers a wide range of work from large ships and bridges to precise engine parts and delicate jewelry. It therefore includes a correspondingly wide range of skills,...
machine tool
Machine tool
A machine tool is a machine, typically powered other than by human muscle , used to make manufactured parts in various ways that include cutting or certain other kinds of deformation...
used to shape or cut metal by deforming it with a die. It is frequently used to punch holes in sheet metal
Sheet metal
Sheet metal is simply metal formed into thin and flat pieces. It is one of the fundamental forms used in metalworking, and can be cut and bent into a variety of different shapes. Countless everyday objects are constructed of the material...
in one operation, rather than by cutting the hole or drilling.

If used as a punch, the tool itself consists of a punch and a matching die
Die (manufacturing)
A die is a specialized tool used in manufacturing industries to cut or shape material using a press. Like molds, dies are generally customized to the item they are used to create...
, into which it very closely fits. Both are usually precision machined and then hardened. The material is introduced between the punch and die, and the machine operated. The punch will cut through the material in one movement by shearing it. The punch and die may be of any desired shape, so odd shaped holes and cutouts may be created.

If used as a forging tool the dies can be many different shapes varying from flat to various shapes that will mold the metal to the desired configuration.

A fly press is the type screw press in which the screw shaft is driven by a flywheel
Flywheel
A flywheel is a rotating mechanical device that is used to store rotational energy. Flywheels have a significant moment of inertia, and thus resist changes in rotational speed. The amount of energy stored in a flywheel is proportional to the square of its rotational speed...
or pair of fly weights at the ends of a bar. The wheel can either be cranked by hand or driven by a motor using a friction coupling. The wheel is weighted so its momentum will maintain the motion of the shaft.