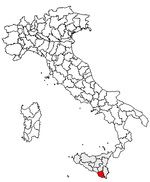 Scoglitti is a small fishing village near the town of Vittoria
Vittoria
Vittoria may refer to:* Vittoria Coffee, Australia's largest coffee company, founded in 1947* Vittoria, Norfolk County, Ontario, Canada* Vitoria-Gasteiz, Spain* Vitória, Brazil* Battle of Vitoria, an 1813 battle in Spain during the Napoleonic Wars...
on the south coast of Sicily
Sicily
Sicily is a region of Italy, and is the largest island in the Mediterranean Sea. Along with the surrounding minor islands, it constitutes an autonomous region of Italy, the Regione Autonoma Siciliana Sicily has a rich and unique culture, especially with regard to the arts, music, literature,...
.

In addition to its fishing industry, the village derives a substantial part of its income from tourism
Tourism
Tourism is travel for recreational, leisure or business purposes. The World Tourism Organization defines tourists as people "traveling to and staying in places outside their usual environment for not more than one consecutive year for leisure, business and other purposes".Tourism has become a...
. The village hosts a daily fishing auction, and annual events such as the Festival of St Francesco, and the procession of the Virgine dif Portosalvo.

Scoglitti found a niche in history after being selected by the Allies
Allies of World War II
The Allies of World War II were the countries that opposed the Axis powers during the Second World War . Former Axis states contributing to the Allied victory are not considered Allied states...
as the site for an amphibious invasion
Amphibious warfare
Amphibious warfare is the use of naval firepower, logistics and strategy to project military power ashore. In previous eras it stood as the primary method of delivering troops to non-contiguous enemy-held terrain...
of Sicily made by the US 45th Infantry Division during World War II
World War II
World War II, or the Second World War , was a global conflict lasting from 1939 to 1945, involving most of the world's nations—including all of the great powers—eventually forming two opposing military alliances: the Allies and the Axis...
.

When the invasion went ahead on July 10, 1943, rough seas disorganized the attacking boat waves, and the soft sand proved an impediment to movement. Fortunately for the attackers, the location was poorly defended and the Allies were able to consolidate their position in a day or two and move further inland.
The source of this article is wikipedia, the free encyclopedia.  The text of this article is licensed under the GFDL.