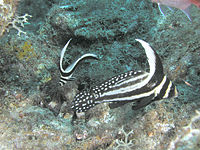 Sciaenidae is a family
Family (biology)
In biological classification, family is* a taxonomic rank. Other well-known ranks are life, domain, kingdom, phylum, class, order, genus, and species, with family fitting between order and genus. As for the other well-known ranks, there is the option of an immediately lower rank, indicated by the...
of fish
Fish
Fish are a paraphyletic group of organisms that consist of all gill-bearing aquatic vertebrate animals that lack limbs with digits. Included in this definition are the living hagfish, lampreys, and cartilaginous and bony fish, as well as various extinct related groups...
commonly called drums, croakers, or hardheads for the repetitive throbbing or drumming sounds they make. The family includes the weakfish
Weakfish
The weakfish, Cynoscion regalis, is a marine fish of the drum family Sciaenidae.The head and back of this fish are dark brown in color with a greenish tinge. The sides have a faint silvery hue with dusky specks, and the belly is white. The origin of its name is based on the weakness of the mouth...
, and consists of about 275 species in about 70 genera; it belongs to the order Perciformes
Perciformes
The Perciformes, also called the Percomorphi or Acanthopteri, is one of the largest orders of vertebrates, containing about 40% of all bony fish. Perciformes means perch-like. They belong to the class of ray-finned fish and comprise over 7,000 species found in almost all aquatic environments...
.

Sciaenids have a long dorsal fin
Dorsal fin
A dorsal fin is a fin located on the backs of various unrelated marine and freshwater vertebrates, including most fishes, marine mammals , and the ichthyosaurs...
reaching nearly to the tail, and a notch between the rays and spines of the dorsal, although the two parts are actually separate. Drums are somberly colored, usually in shades of brown, with a lateral line that extends to the tip of the caudal fin. The anal fin usually has two spines while the dorsal fins are deeply notched or separate. Most species have a rounded or pointed caudal fin. The mouth is set low and is usually inferior.

They are found worldwide, in both fresh and saltwater, and are typically benthic
Benthic zone
The benthic zone is the ecological region at the lowest level of a body of water such as an ocean or a lake, including the sediment surface and some sub-surface layers. Organisms living in this zone are called benthos. They generally live in close relationship with the substrate bottom; many such...
carnivores, feeding on invertebrate
Invertebrate
An invertebrate is an animal without a backbone. The group includes 97% of all animal species – all animals except those in the chordate subphylum Vertebrata .Invertebrates form a paraphyletic group...
s and smaller fish. They are small to medium-sized bottom dwelling fishes that live primarily in estuaries, bays, and muddy river banks. Most of these fishes avoid clear waters such as coral reefs and oceanic islands with a few notable exceptions (i.e., Reef Croaker, High-hat, and Spotted Drum). They live in warm-temperate and tropical waters and are best represented in major rivers in S.E. Asia, Plymouth UK, N.E. South America, Gulf of Mexico, and Gulf of California.

They are excellent food and sport fish and are commonly caught by surf and pier fishers.

The sounds are produced by the beating of abdominal muscles against the swim bladder. In the Mississippi Valley region of the U.S., there is a widespread but inaccurate belief that the drumfish makes the sounds by rattling two loose bones inside its cranium. There are, in fact, no such bones.