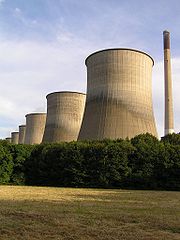 Scholven Power Station is a E.ON
E.ON
E.ON AG, marketed with an interpunct as E•ON, is the holding company of the world's largest investor-owned energy service provider based in Düsseldorf, Germany. The name comes from the Greek word aeon which means eternity....
owned coal
Coal
Coal is a combustible black or brownish-black sedimentary rock usually occurring in rock strata in layers or veins called coal beds or coal seams. The harder forms, such as anthracite coal, can be regarded as metamorphic rock because of later exposure to elevated temperature and pressure...
-fired power station in Gelsenkirchen
Gelsenkirchen
Gelsenkirchen is a city in North Rhine-Westphalia, Germany. It is located in the northern part of the Ruhr area. Its population in 2006 was c. 267,000....
, Germany. Its installed output capacity of 2300 MW it is one of the most powerful coal-fired power stations in Europe.

Two power station units present on the location were beaconed up to their shut-down with oil. The power produced in the power station Scholven covers about 3% of the German current need. The units B - E, the long-distance heating power station Buer (FWK) and the steam work Scholven (DWS) supply steam to neighbouring chemistry enterprises and long-distance heating to some surrounding cities. The 302 metre high chimney
Chimney
A chimney is a structure for venting hot flue gases or smoke from a boiler, stove, furnace or fireplace to the outside atmosphere. Chimneys are typically vertical, or as near as possible to vertical, to ensure that the gases flow smoothly, drawing air into the combustion in what is known as the...
s, which are the second highest in Germany, form an impressing industrial skyline together with the 7 cooling tower
Cooling tower
Cooling towers are heat removal devices used to transfer process waste heat to the atmosphere. Cooling towers may either use the evaporation of water to remove process heat and cool the working fluid to near the wet-bulb air temperature or in the case of closed circuit dry cooling towers rely...
s. The power station area and the neighbouring waste dump of the coal mine Scholven scene in the became a film location in the Tatort
Tatort
Tatort is a long-running German/Austrian/Swiss , crime television series set in various parts of these countries. The show is broadcast on the channels of ARD in Germany, ORF 2 in Austria and SF1 in Switzerland...
"The ball in the body" of 1979.

The power station came out from an enterprise for the covering of the internal requirement at river and steam of the coal mine Scholven. Soon however from it a high performance main power station developed. In the years 1968 to 1971 the almost identically constructed blocks B to E went into enterprise, 1974 and 1975 followed G and H (50 % portion of RWE power), 1979 the block F and at the end of 1985 the long-distance heating power station Buer (FWK). The block G was shut down in summer 2001, the block H finally in summer 2003.