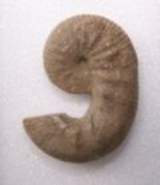 Scaphites generally have a chambered, boat-shaped shell. The initial part (juvenile stage) of the shell is generally more or less involute (tightly-coiled) and compressed, giving no hint of the heteromorphic shell form yet to come. The terminal part (adult stage) is much shorter, erect, and bends over the older shell like a hook. They have transverse, branching ribs with tubercles (small bumps) along the venter.

Reconstructions of the body within the shell can be made to portray Scaphites as either a benthic (bottom-dwelling) or plankton
Plankton
Plankton are any drifting organisms that inhabit the pelagic zone of oceans, seas, or bodies of fresh water. That is, plankton are defined by their ecological niche rather than phylogenetic or taxonomic classification...
ic animal, depending on where the center of gravity is located. Since useful fossil
Fossil
Fossils are the preserved remains or traces of animals , plants, and other organisms from the remote past...
s of the soft-body parts of cephalopods are highly rare, little is known about how this animal actually fit into its shell and lived its life.

Because Scaphites and its relatives in Superfamily Scaphitaceae are restricted to certain divisions of the Cretaceous
Cretaceous
The Cretaceous , derived from the Latin "creta" , usually abbreviated K for its German translation Kreide , is a geologic period and system from circa to million years ago. In the geologic timescale, the Cretaceous follows the Jurassic period and is followed by the Paleogene period of the...
(ca. 144 to 66.4 million years ago), they are useful in some areas as an index fossil
Index fossil
Index fossils are fossils used to define and identify geologic periods . They work on the premise that, although different sediments may look different depending on the conditions under which they were laid down, they may include the remains of the same species of fossil...
. A notable example is the Late Cretaceous Western Interior Seaway
Western Interior Seaway
The Western Interior Seaway, also called the Cretaceous Seaway, the Niobraran Sea, and the North American Inland Sea, was a huge inland sea that split the continent of North America into two halves, Laramidia and Appalachia, during most of the mid- and late-Cretaceous Period...
in North America, in which several endemic
Endemic (ecology)
Endemism is the ecological state of being unique to a defined geographic location, such as an island, nation or other defined zone, or habitat type; organisms that are indigenous to a place are not endemic to it if they are also found elsewhere. For example, all species of lemur are endemic to the...
lineages of scaphite species evolved and now serve as the basis for a highly resolved regional biostratigraphy
Biostratigraphy
Biostratigraphy is the branch of stratigraphy which focuses on correlating and assigning relative ages of rock strata by using the fossil assemblages contained within them. Usually the aim is correlation, demonstrating that a particular horizon in one geological section represents the same period...
.