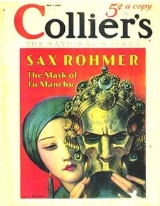 Encyclopedia
Arthur Henry Sarsfield Ward (15 February 1883 – 1 June 1959), better known as Sax Rohmer, was a prolific English
England
England is a country that is part of the United Kingdom. It shares land borders with Scotland to the north and Wales to the west; the Irish Sea is to the north west, the Celtic Sea to the south west, with the North Sea to the east and the English Channel to the south separating it from continental...
novelist. He is best remembered for his series of novels featuring the master criminal Dr. Fu Manchu
Fu Manchu
Dr. Fu Manchu is a fictional character introduced in a series of novels by British author Sax Rohmer during the first half of the 20th century...
.

Born in Birmingham
Birmingham
Birmingham is a city and metropolitan borough in the West Midlands of England. It is the most populous British city outside the capital London, with a population of 1,036,900 , and lies at the heart of the West Midlands conurbation, the second most populous urban area in the United Kingdom with a...
to a working class
Working class
Working class is a term used in the social sciences and in ordinary conversation to describe those employed in lower tier jobs , often extending to those in unemployment or otherwise possessing below-average incomes...
family, Rohmer initially pursued a career as a civil servant before concentrating on writing full-time.

He worked as a poet, songwriter, and comedy sketch writer in Music Hall
Music hall
Music Hall is a type of British theatrical entertainment which was popular between 1850 and 1960. The term can refer to:# A particular form of variety entertainment involving a mixture of popular song, comedy and speciality acts...
before creating the Sax Rohmer persona and pursuing a career writing weird fiction.

Like his contemporaries Algernon Blackwood
Algernon Blackwood
Algernon Henry Blackwood, CBE was an English short story writer and novelist, one of the most prolific writers of ghost stories in the history of the genre. He was also a journalist and a broadcasting narrator. S. T...
and Arthur Machen
Arthur Machen
Arthur Machen was a Welsh author and mystic of the 1890s and early 20th century. He is best known for his influential supernatural, fantasy, and horror fiction. His novella The Great God Pan has garnered a reputation as a classic of horror...
, Rohmer claimed membership to one of the factions of the qabbalistic Hermetic Order of the Golden Dawn
Hermetic Order of the Golden Dawn
The Hermetic Order of the Golden Dawn was a magical order active in Great Britain during the late 19th and early 20th centuries, which practiced theurgy and spiritual development...
. Rohmer also claimed ties to the Rosicrucians, but the validity of his claims has been questioned. His physician and family friend, Dr. R. Watson Councell may have been his only legitimate connection to such organizations. It is believed that Rohmer may have exaggerated his association in order to boost his literary reputation as an occult writer.

His first published work came in 1903, when the short story The Mysterious Mummy was sold to Pearson's Weekly. He gradually transitioned from writing for Music Hall
Music hall
Music Hall is a type of British theatrical entertainment which was popular between 1850 and 1960. The term can refer to:# A particular form of variety entertainment involving a mixture of popular song, comedy and speciality acts...
performers to concentrating on short stories and serials for magazine publication. In 1909 he married Rose Elizabeth Knox.

He published his first novel Pause! anonymously in 1910 and the first Fu Manchu novel, The Mystery of Dr. Fu-Manchu, was serialized from October 1912 - June 1913. It was an immediate success with its fast-paced story of Denis Nayland Smith and Dr. Petrie facing the worldwide conspiracy of the 'Yellow Peril
Yellow Peril
Yellow Peril was a colour metaphor for race that originated in the late nineteenth century with immigration of Chinese laborers to various Western countries, notably the United States, and later associated with the Japanese during the mid 20th century, due to Japanese military expansion.The term...
'. The Fu Manchu stories, together with his more conventional detective series characters—Paul Harley, Gaston Max, Red Kerry, Morris Klaw, and The Crime Magnet—made Rohmer one of the most successful and well-paid authors of the 1920s and 1930s.

Rohmer also wrote several novels of supernatural horror
Horror film
Horror films seek to elicit a negative emotional reaction from viewers by playing on the audience's most primal fears. They often feature scenes that startle the viewer through the means of macabre and the supernatural, thus frequently overlapping with the fantasy and science fiction genres...
, including
Brood of the Witch-Queen. Rohmer was very poor at managing his wealth, however, and made several disastrous business decisions that hampered him throughout his career. His final success came with a series of novels featuring a female variation on Fu Manchu, Sumuru
Sumuru (literary character)
Sumuru is a female supervillain created by Sax Rohmer, author of the Fu Manchu series of novels. She leads a secret organisation known as the Order of Our Lady.-Radio:...
.

After World War II
World War II
World War II, or the Second World War , was a global conflict lasting from 1939 to 1945, involving most of the world's nations—including all of the great powers—eventually forming two opposing military alliances: the Allies and the Axis...
, the Rohmers moved to New York only returning to London shortly before his death. Rohmer died in 1959 due to an outbreak of influenza ("Asian Flu"). His wife published her own mystery novel, Bianca in Black in 1954 under the pen name, Elizabeth Sax Rohmer. Some editions of the book mistakenly credit her as Rohmer's daughter. Elizabeth Sax Rohmer and Cay Van Ash
Cay Van Ash
Cay Van Ash was a Professor of English Literature at Waseda University in Japan and a writer....
, her husband's former assistant, wrote a biography of the author, Master of Villainy, published in 1972.